Kent Osborne
Somvilay Xayaphone
"The Pods" is the thirteenth episode in the second season of Adventure Time. It's the thirty-ninth episode overall.

Finn takes up a quest from a dying knight to protect three magic beans: two good, one evil. But when he and Jake decide to plant the beans to eliminate the evil once and for all, will they be able to figure out which is which in time?

The episode starts with Finn and Jake walking, while Jake eats ice cream and talks about how excited he is for the upcoming Ice Cream Marathon being held the next day. Suddenly, they hear a mysterious croaking sound. Following the noise, they stumble upon a frog in a Gnome Knight costume. It is revealed that the frog is a Gnome Knight magically turned into a frog. He is dying and needs a pure hero to take over his task of guarding a chest with three magic beans inside of it. He states that two of the beans are good and one is horribly evil, but since the beans are identical, he does not know which is which. Thus, he has spent his entire life guarding all three. Jake does not want to guard the beans, so he makes an excuse and backs out, but Finn takes pity on the knight and volunteers that he and Jake will assume his task. The Knight gives Finn the chest and also his staff. Then, the Knight dies and Finn and Jake are left with the chest of beans.

Jake wants them to take the beans with them to the Ice Cream Marathon, but Finn insists that they stay where they are. After a period of time, Jake suggests (being bored out of his mind and hot from sitting outside all day) that they plant all three beans and kill off the evil one. With his convincing idea, Finn agrees. They plant the beans and wait all day for when they blossom. They end up falling asleep. The next day, the first bean has grown into a large plant with a bulging sac at the end of the tall, drooping stalk. After prodding, the sac opens to reveal several Baby Pigs dressed in silly costumes (a doctor, a construction worker, a bumblebee, a chef, a cowboy, and a magician). Jake immediately thinks they're good but Finn keeps his guard up and decides to give the piglets personality tests to see if they're evil. Jake insists that nothing evil could be this adorable and Finn finally agrees and proclaims the pigs good, even though Finn notices that one drew a picture of ice cream under "Do you have any allergies?"

As they are doing this the second pod grows, its sac releasing magic wands. Finn and Jake assume that it is good, so Finn and Jake end up playing games with all the baby piglets, who play with the magic wands. After a long day, they fall asleep. When Finn and Jake wake up the next morning, they notice that the third pod has sprouted, its sac was bigger than the other sacs. Assuming that it is the evil one, they begin attacking it. Jake notices that the sac is "leaking" a brown substance. Upon opening the sac, Jake sees that it is full of ice cream and proceeds to eat some of it. Finn is worried that Jake is being poisoned, but Jake assures him that this pod was "the goodest thing that's ever happened to me." Finn realizes that this pod is good.

They then notice that the piglets and the magic wands have vanished. They find them terrorizing Mushroom Village, using the magic wands to destroy the town and make its inhabitants dance. Jake also gets struck by the wand and starts dancing. Finn, thinking quickly, reviews the personality tests he had given the piglets and finds out that they are allergic to ice cream. Carrying the sac of ice cream on his back, he proceeds to squirt massive jets of ice cream at each piglet, which in turn makes them explode into confetti. He almost gets won over by the adorable gaze of the construction worker piglet but is still able to spray it with ice cream. 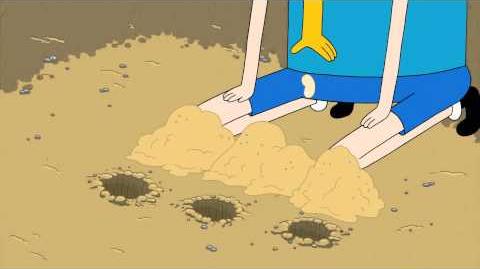 The holes to plant the pods

Path to the Mushroom Village

Inside the 3rd pod

Mushroom Village after it is piled with ice cream

Ashes to ashes, dust to dust.

Nothing evil could be THIS adorable! 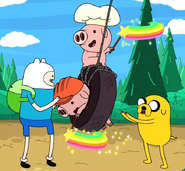