The Party's Over, Isla de Señorita

The Party's Over, Isla de Señorita

"The Party's Over, Isla de Señorita" is the twenty-second episode in the fifth season of Adventure Time. It's the one hundred and twenty-sixth episode overall.

After another one of his kidnapping schemes ends badly, Ice King, tired of always losing fights with Finn and Jake and failing to win the love of Princess Bubblegum, gives up his repetitive life and moves to an island that turns out to be alive and sentient.

The episode begins during morning time in the Candy Kingdom, in the quiet bedroom of a sleeping Princess Bubblegum. Ice King crawls out from under her bed and takes out a roll of duct tape. After commenting that she looks beautiful when sleeping, he puts duct tape over Princess Bubblegum's mouth, causing her to immediately wake up with a muffled protest. Surprised, she hits Ice King with a pillow, rips off the tape and angrily asks what he is doing in her kingdom. He claims that he was trying to surprise her by taking her back to his "place" and making her breakfast in bed. He calls her "baby." Princess Bubblegum is infuriated, while Ice King appears to become hurt, as he seems to think Princess Bubblegum and he have a real, romantic relationship, and that she will somehow agree to go with him. Princess Bubblegum calls in the Banana Guards, who begin to take Ice King away. He struggles free and runs back to Princess Bubblegum, asking her to look into her heart, and promising that if she can honestly tell him she wants him gone, he will go. She does, and he is willingly taken away by the guards. As Ice King walks away from the Candy Kingdom, Finn and Jake begin telling him to leave the princess alone, but Ice King interrupts them quickly and yells that he is leaving.

Ice King returns home and takes a shower, questioning his own actions. He thinks about Princess Bubblegum, while he looks at a picture of her (in which she seems to be unwillingly photographed). He claims he must leave Ooo and begin somewhere "fresh." He kisses Gunter goodbye as he leaves the kingdom.

Ice King begins rowing himself away from his kingdom in a rowboat made of ice. Clouds roll in above him as a storm begins. Ice King tries to row back, but the storm overtakes his boat, and he is whipped around in the water.

Ice King wakes up stranded, lying on the shore of a sandy beach. After quickly surveying the island he is on, he decides that there are no signs of life, besides a bird. He takes off his crown and ties it onto the end of his beard, saying he will not need it anymore, and makes a hat out of palm tree leaves. He hears a woman singing through the island's nearby forest. He asks if there is anyone there and runs through the forest, towards the singing. He finds a large, smooth sand mound and walks to the top of it to look around. He is surprised to find out that there is no lady on the island; rather, the island itself is a woman. From his high-up location Ice King can see that the island is shaped like a woman in a bikini, but she is not moving except for her face; the sand mound he is on turns out to be her raised right knee. The Island Lady notices him and greets him, asking if her singing is bothering him. He says no multiple times, but she cannot hear him. He tells her to hold on and begins walking towards her head.

Two days later, he arrives and climbs onto her face. She reminds him of the question and he again replies no, saying that it was, in fact, quite enchanting. The island lady says that she always sings when her boyfriend away, and says he is Party God. A howling is heard in the distance, and Island Lady tells Ice King to hide because Party God gets "crazy jealous." Ice King rolls into a ball on her face. Party God arrives and tells Island Lady he is looking for his stereo because he puked in the stereo of a party he was at. He explains that he was spinning and got dizzy, which is why he vomited. He finds his stereo on Island Lady and says he has to leave. The Island Lady asks if he wants to hang out, but he says he is in the middle of a party and must leave.

When Party God is gone, Ice King unrolls and criticizes the Party God for being so rude to the Island Lady. She claims her boyfriend is "ok...sometimes." Ice King realizes he is actually being hypocritical because his "GF," Princess Bubblegum treats him like "poopies" as well (even though they are not actually dating). The Ice King and the island lady realize they are in pretty similar situations, though Ice King's is mostly imaginary. Island Lady says she likes Ice King and that he can stay on her as long as he wants.

In a montage, the island lady sings a song about friendship as Ice King builds a hut on her midriff out of things he finds on the island. He farms some grapes and smashes them into grape juice.

Ice King and the Señorita discuss their relationships. Ice King claims the Princess is too closed off to her emotions, and reasons that this indifference is keeping her from realizing her true feelings. The island lady says that she does not matter to the Party God. Ice King feels bad because he thinks that Bubblegum cares if he is with her, while Party God does not care about the island lady. She wishes that Party God would go into outer space where the señorita would never have to see him again. With Ice King's encouragement, she decides to break up with him.

Just then, the Party God howls and arrives back because he forgot to bring batteries. He finds them and gets suspicious about the hut that is now built on Island Lady. She claims it is just something that washed up on her after a storm. He thinks for a moment, then says "whatever." Island Lady begins to try and break up with him, but falters and ends up saying she hopes he has fun at his party. He leaves, seemingly a little weirded out by his girlfriend but unconcerned with her. Ice King gets up and scolds her for not breaking up with him. He decides to break up with him for her as he puts on his crown. He flies up and catches up with Party God. He begins to explain, but the Party God becomes infuriated upon hearing that the Ice King has been spending a lot of time with his girlfriend. Ice King claims that he and Island Lady are strictly platonic.

The Party God shoots a laser beam at Ice King from his mouth, but Ice King dodges it. Ice King begins fighting back, and after a brief fight scene showing some of Party God's other powers, Ice King eventually freezes a cloud that falls on the Party God, knocking him out.

Ice King returns to the señorita, holding Party God up from behind, and pretends that he was not knocked out, byopening and closing the God's mouth with his feet and holding his eyes open with his hands. (Somehow, Ice King succeeds in making Party God look conscious.) At first, the island lady says there is nothing she wants to tell him, but when Ice King breaks Party God's oblivious character to encourage the breakup, she shortly breaks up with him and says that it was due to her emotionally mature friend, Ice King. Ice King (still pretending to be Party God) says that he is going to break up with his girlfriend, and that he will visit. Ice King leaves Island Lady, throws Party God into outer space, and returns to the Candy Kingdom. He breaks into Princess Bubblegum's castle to tell Princess Bubblegum that he is breaking up with her, because she treats him badly and is always away at parties. Then he leaves, whispering, "We'll work things out," to himself. 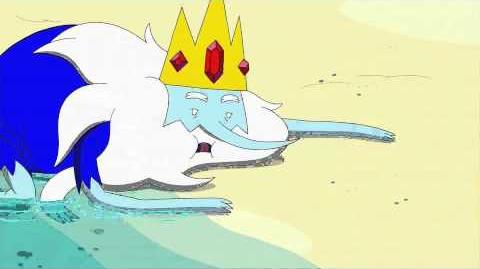 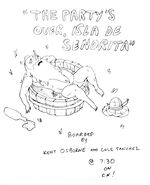 The second crown can be seen right behind Ice King.