Somvilay Xayaphone
Seo Kim[1]
"The Pajama War" is the twenty-third episode in the sixth season of Adventure Time. It's the one hundred and seventy-ninth episode overall.

When Finn and Princess Bubblegum supposedly get "stuck" in a closet in a slumber party, panic erupts among the remaining guests.[2]

The episode begins with Finn calling out to Tree Trunks, who is coming along with Mr. Pig. He calls out to her in the same manner as in "Slumber Party Panic," but this time, Mr. Pig gets offended by him, since he thinks that he is flirting with his wife. He runs to Finn who keeps calling out to Tree Trunks and slaps him. Finn tries to tell him he just was calling Tree Trunks to get the hot buns she baked. But halfway through, he constantly gets slapped by Mr. Pig, who takes it in the wrong way. Mr. Pig takes the basket of hot buns and puts them near Finn. Mr. Pig then takes his wife's trunk, and leaves with her.

After this, Princess Bubblegum calls out to Finn, saying the slumber party is starting and the Candy People are starting to play a game of musical chairs. They both quickly rush to the place. Chet begins the music, and the people go round and round. He quickens the speed of the music and the people start running around. After that, the music stops abruptly. Everyone goes and sits out. Finn and Bubblegum were running around trying to find a seat. Mr. Cupcake exclaims that there is an empty chair near him, Princess Bubblegum and Finn both sit in the seat. They both apologize to each other, offering the seat to the other. And they also refuse that offer, all the while talking at the same time. Time finishes, and Chet and the others say that since Finn and Bubblegum didn't sit on a seat, they both had to be sent to the closest closet, where they will have heavenly thoughts.

They come to a nearest closet and the Candy People send them both inside. After going inside, Finn and Bubblegum sit down facing each other and start getting bored. Bubblegum then exclaims that whether Finn would like to ditch the party and go for a walk. Finn is suprised, asking what will happen to the Candy People, but Bubblegum wards off this thought, telling him they will be fine.

They both go between some coats, which is revealed to be a secret passage. Outside, the Candy People are getting anxious. Manfried says that the quietness is overwhelming. Crunchy says that someone should listen to the doors to hear what is going inside. Mr. Cupcake says that the people have nominated Crunchy to go hear at the door, and tell them what is happening. Starchie takes Crunchy near the door, telling him that he is the go-to guy, the new Cinnamon Bun.

After he goes to hear at the door, the people ask him what is he hearing, and tells him to paint an imaginary image of what's happening. He says that he hears there is a lush green field and a piquant white fence, Finn and Bubblegum have bought picnic baskets, and are laughing since they have bought the same thing and then Finn and Princess Bubblegum kissed.

Chocoberry dismisses this, as there can't be a field inside a closet. Crunchy says that they asked him to paint an imaginary image, so he went on to tell what his imagination told him. Chocoberry then asks just what he hears, to which he replies he hears nothing, and thinks that they both are just light brushing their lips together.

Starchie overreacts, and tells maybe they smooched so much, they passed out. In a panic, he tells Crunchy to open the door, but Crunchy couldn't reach the knob. Mr. Cupcake comes and tells that he will open it, but instead, he crushes the door knob. He then proudly tells that he is just too strong that the knob got crushed. One of the citizen gets freaked out, saying what will happen if they run out of air. Mr. Cupcake dismisses the idea, and also starts to overreact. He says that he will break the door open. Chet comes and tells him that his strength might kill them if he smashes the door open, but says that there is a drill and saw in the supplies room.

Mr. Cupcake goes to open the door. The Candy People try to stop him, but they get there too late, and Mr. Cupcake crushes the knob of the supplies room too. Jake exclaims that they must do something, as it is his best friend in there. After that, he silently texts to Finn in his smart phone that whether he is okay. Finn replies that Bubblegum and himself have gone out secret coat passage.

Bubblegum and Finn talk on their way, and Finn asks whether the Candy People will be okay. She told him they are a bit of over reactors, but they mean well. Bubblegum then asks if Finn would like to meet Timmy. Finn agrees, and the princess pushes a button in front of them, revealing that the both were in a visual simulator the whole time. Bubblegum calls out to Timmy, who is a giant cat, and it arrives near them. Finn says that it is very cute. Bubblegum hops on the back of the cat and tells Finn to get on its back too, and they both leave the simulator room.

Back in the castle, Mr. Cupcake is blowing air inside the closet room so the door will fall outwards, without hurting the duo inside. Chet suddenly shouts for him to stop, saying that the Candy People exhale a poisonous gas. He was going to say carbon dioxide, but Jake interrupts and says that he knows what they are talking about, and farts, telling that its name is fart and that it is deadly.

Chocoberry tells Mr. Cupcake to suck the air out, who sucks it out, but then falls unconscious. Everyone thinks that he is dead. Jake laughs at the back while eating nachos. It is seen that the princess and Finn are going through a tunnel in a forest, talking about what do they plan to do in the weekends. After saying, Finn gets shocked that Bubblegum does so much work. He asks whether she gets tired of this, but she says that its her responsibility to do so. She throws some glowing seeds above Finn. She further tells that she is trying to have a change, minding her own business rather than getting constantly around the Candy People. Some Jelly birds arrive and start to peck at the seeds on Finn.

Finn also goes on with the conversation, saying he has been thinking about Martin. After he finishes his conversation, Timmy jumps on him and eats all the Jelly Birds. All three of them sit on the ground, while Finn takes their selfie. Back at the castle, Manfried acts as a leader, telling that if they build a large sweater and put it over the door and fire a cannon at it, it will fall down softly and would not kill anyone inside. Mr. Cupcake praises him, saying he is a good leader because they can see him. They put the sweater over the door, and Colonel Candy Corn arrives with a cannon. Behind, Jake is laughing talking with Finn over the phone, and Chocoberry arrives, asking him isn't he worried or not. Jake says that he is worries and cries fake tears, and Chocoberry consoles him, falling for his falseness. Colonel Candy Corn fires the cannon, but instead, it blows up with a huge explosion and creates a crater.

The Candy People then ask Chocoberry, who allegedly had the ability to see spirits, if they're still alive in the closet. She says they aren't. Meanwhile, Jake keeps texting and does not correct the mistake and, when two leaders want the crown pointed out by Jake (from a portrait of Princess Bubblegum), Manfried and Colonel Candy Corn form sides, which battle until the latter wears the painted crown. Crunchy stays in the shadows. Jake sends Finn a video of the battle, and when Princess Bubblegum sees it, she decides to deal with it later and continue having fun.

Colonel Candy Corn proclaims three ridiculous rules regarding pizza and milk, and Crunchy "kindly" offers to bring something to the new lord. He asks for a pizza.

Jake says he must do something, so he sends Finn funny pictures of himself. Finn and Princess Bubblegum are watching a sunset on the screen, and nearly have a moment, until he gets Jake's pictures, and she sees them. Colonel Candy Corn was acting brutally in the background of one, so she says that the Candy People's makeshift government had been taken over by a ruthless despot, Finn questions why she isn't freaking out and she says it was worth giving them a shot. As they both get up she says they should go back to the party and they'll have to save it.

Crunchy has taken over in this gap, obtained the painted crown and is riding the Colonel as a horse, and then attempts to kill Starchie by making others push him into the crater. His final statement is that Crunchy smells. Princess Bubblegum shows up and sends everyone back to their sleeping bags under the promise of a story, which is about the history of modern man's clothing. Finn looks at the pictures of him and Bubblegum having fun on his phone-like device and chuckles. 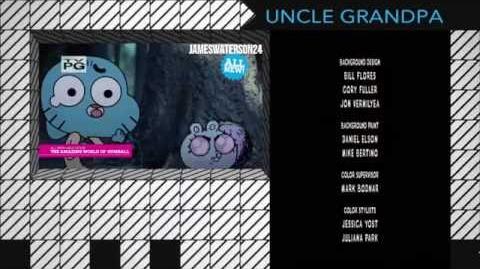 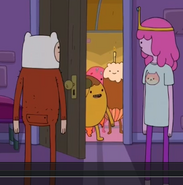