Tom Herpich
Bert Youn
"The New Frontier" is the eighteenth episode in the third season of Adventure Time. It's the seventieth episode overall.

Finn tries to stop Jake from embracing a dream that he believes foretells his final demise.

Jake has a Croak Dream involving a rocket ship and a Banana Man in space. He runs out of air after holding his breath too long and sees the Cosmic Owl. After he wakes up and tells Finn about the dream, they hear someone knocking on the door. Finn looks out the window and sees the Banana Man. Finn freaks out and throws Jake behind a large container, and hides there with Jake and tells him that the Banana Man is there. Finn looks outside again to see what he is doing. They decide to follow him to his house after he begins to walk away from the Tree Fort, and across the Grass Lands. They get to his house and go up to the Banana Man's window when he walks into his house. They see him turn on the T.V. and put on a helmet just like the one seen by Jake in his dream. He starts to dance along to what was on. Finn pulls out a crossbow and an arrow from his backpack, and uses some type of friction that creates fire when you rub your hands together, and blow in between your hands and small flames form. This sets the arrow on fire. After firing arrows at him to try to scare him away, the arrow that they used flies into the back of his home, and when Finn and Jake go there to get it they find his rocket ship in his backyard. Jake tries to ride it, despite Finn trying to convince him not to, because he says it is his destiny. The Banana Man walks into the backyard (holding glass, which was probably for the window) and sees them fighting on the floor. The rocket fails to launch since it did not have enough dynamite to blast off. The Banana Man drops his plate on glass on the ground, shattering it (in its own cutaway,) which in conjunction with the windowless vessel featured in the croak dream suggests that Finn's attempt to avert Jake's fate might actually have sealed it. When the ship lands on the ground it creates a hole, which Jake, Finn, and the Banana Man fall into. They fall into a pool of water which re-creates Jake's dream, only Finn is there so the Croak Dream does not come true. They find out that the Banana Man only wanted to borrow some sugar. After that, Jake then says that his Croak Dream was not real; unless he did not die since Finn was with him this time, meaning it was destined to happen again. The episode ends with Finn running after Jake, so that his Croak Dream would never come true. In the final scene, The Banana Man starts dancing along.

The Cosmic Owl at the end of Jake's Croak Dream 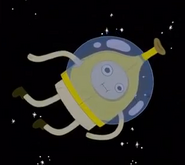 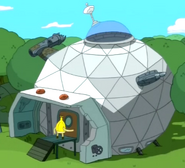 It's the banana man. 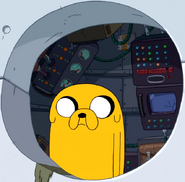