Jesse Moynihan
Sam Alden
"The Mountain" is the twenty-eighth episode in the sixth season of Adventure Time. It's the one hundred and eighty-fourth episode overall.

The Earl of Lemongrab and Finn go on an expedition through the Mountain of Matthew.[1]

The episode opens up on the Castle Lemongrab. Inside, Lemongrab and his lemon citizens are being served lemon candies for dinner. After Lemongrab commences dinner, he and his citizen eat one spoonful of the lemon candies and dinner is concluded with a clap. Lemongrab says, "Up." and is lifted then passed across by a chain of identical lemon citizens to a window. As Lemongrab looks out the window, we see different looking lemon citizens doing specific tasks. They include harvesting, smashing, picking and planting lemon seeds. One citizen is seen using pulp from a lemon to make a statue of Lemongrab.

After he finished surveying, Lemongrab shouts, "Lights Out!", and the lemon citizens stop what they're doing and collapse into sleep. The scene moves to the Earl's bedroom as he is carried into his bed by the citizens. As he's in bed, lemon citizens place a catchers mitt on his right hand and place a bag of lemon seeds on a nightstand beside him. While awake, the Earl gazes up, with a puzzled look, at an archaic picture drawn on the ceiling. Lemongrab realizes that something strange is happening to the scene, and shortly afterward a piece of it falls out. Lemongrab becomes irritated by this, and, grabbing the lemon seeds on his nightstand, he gets on his lemon camel and leaves Castle Lemongrab. As he leaves, he curtly exclaims "Bye!" to lemon citizens guarding the castle gate, and they immediately fall asleep after closing it.

The scene transitions to Finn and Jake camping out on a mountain at night. Finn tells Jake to hurry and finish heating his cocoa on the campfire so he won't miss the "Dap of the Heavens." Finn looks through a telescope and we see two stick-figure constellations hands' begin to shine as their hands "dap" each others'. Jake stretches to where Finn is and Finn informs him that he missed it and how is was actually "a little disappointing." Jake then begins to hear noise and Finn looks through the telescope to see Flame Princess and Cinnamon Bun rehearsing a dance routine. Finn, crest fallen, asks Jake if he meant Flame Princess. Jake corrects him and points to Lemongrab, on his lemon camel, heading for the Mountain of Matthew. Finn decides to follow Lemongrab. Jake asks him why and he responds that Lemongrab may be, "messing with crazy mystic power" and that "he needs to distract himself with work since he saw Flame Princess." Jake then stretches into a hanglider and flies Finn to the entrance of the Mountain of Matthew. Finn spots Lemongrab's lemon camel and dashes inside. Jake tries to follow him but a mass of white rocks on the ground of the entrance suddenly forms into a big pile, blocking Jake by forming into an obstacle each time he tries to get through. Jake is perturbed by this, but the Guardian of the Mountain tells him that "he has no beeswax in the Mountain of Matthew.." but that Finn has "way cray beeswax." Finn continues without Jake and the scene moves to the caves below the Mountain of Matthew.

The Earl goes on an introspective journey, seeing his greatest desire (to be accepted by his "mother" Bubblegum), his worst fear (Lemonhope taking over his kingdom and solving the ills that he, Lemongrab, once wrought), and his past selves, Lemongrab 1 and 2, arguing over Lemon-Sweets. Lemongrab chooses Lemon-Sweets, though he grows smaller and smaller. He jumps into Lemon-Sweets open mouth. Lemongrab slides down until he finds himself surrounded by darkness, but laying on top of a greasy yellow surface he finds unpleasant. The surface tips suddenly and Lemongrab falls, grabs the edge just in time, and is left dangling above the void. Lemongrab shakes his fist as he curses the circumstances. After he does, a disembodied voice tells him to taste the grease, then to look up. He looks up to see himself, staring back at himself. He then incredulously asks, "I am grease?"

Finn who is now facing the same ordeal. He has to choose either to dance with Flame Princess as Cinnamon Bun, go to his Tree House where Jake just made Finn cakes, or to join one of his past lives, a butterfly.

Finn as hears tiny Lemongrab ejecting his pure essence out of the top of his head. Finn chooses his past self, the butterfly, and it flies him to a fleshy looking area and begins to run. Finn realizes that he running on his arm and is now tiny in comparison to the arm of himself that he is running on. Finn is surprised by this which makes his tiny self, bigger self (that is tiny self is running on), and a now even tinier self that is running on Finn's tiny self's arm. Finn's tiniest self then runs off of his tiny self's arm and into blackness running towards a light in the distance.

Finn reaches the light, were we can see Lemongrab and they are both now wearing white robes as Finn confronts Matthew. Finn tells Matthew he thinks the Matthew is "negative" based on the reputation Jake gave him about Matthew. Matthew tells Finn to ask himself if he feels right about interpreting Matthew as negative and Finn asks his sword and his sword shakes its head, no. Matthew then explains how the bodies of many have come together and, "…distilled themselves to their original source materials and now exist in one-ness". Matthew's purpose is to keep adding to himself until the second age of terror where he'll "restore" the world in his "final form." Finn asks Lemongrab if he's here to merge with Matthew and Lemongrab says, "that is one option…" but then goes on to explain what he is really going to do. Lemongrab pulls out lemon seeds that he calls "Lemon-Jons" and throws them into Matthew's mouth after shouting a metaphor for the "infinite stairs" that is Matthew. Matthew then falls in to the ground and explodes and in his place are appear 15 creatures wearing robes. Horrified, the creatures begin to surround Lemongrab, but Finn saves him.

Jake is shown talking to the Guardian of the Mountain before Lemongrab uses Finn's sword to blow him to pieces. The rocks that were the Guardian turned into the same creatures in robes, groaning in pain. Lemongrab then says, "I'm done, let's go."

The next scene shows Jake carrying Lemongrab, his camel, and Finn to Castle Lemongrab. Lemongrab and his camel jump off of Jake, fall through his castle roof, through a pool of lemon juice, and down his bedroom ceiling where he lands on his bed, looks up at the archaic scene, chews some lemon seeds and spits it into the crack to fill it. 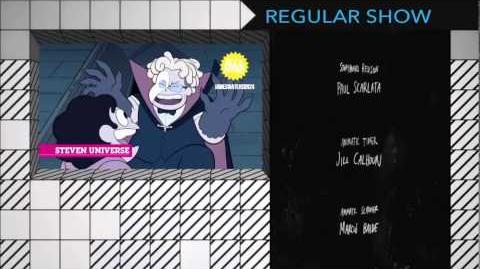 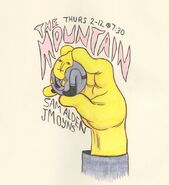 The Mountain promo by writer and storyboard artist Jesse Moynihan 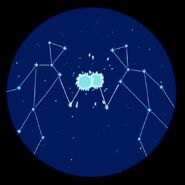 Dap of the Heavens