"The Limit" is the twenty-second episode in the second season of Adventure Time. It's the forty-eighth episode overall.

On a mission to save soldiers of Hot Dog Princess, Finn and Jake go inside a massive maze where wishes can be granted and where Jake's stretching powers are pushed to their limits.

The episode starts with Finn and Jake looking at the night sky with Hot Dog Princess at her house. The two hope for a shooting star so that they can wish for an Ancient Psychic Tandem War Elephant. A firework is shot into the sky, which Jake initially mistakes for being a shooting star. The firework then explodes and spells the acronym B.U.T.T. Hot Dog Princess quickly identifies this as a distress signal from her other Hot Dog Knights, who were sent to rescue her other other Hot Dog Knights from a labyrinth. She says that the acronym means "Baby Us Trouble Time," and takes this to mean that the Knights are in grave danger, as Hot Dog Knights are notoriously "slow." Since the Hot Dog Knights in the yard are playing in the mud, Finn and Jake tell Hot Dog Princess that she does not need to worry and offer to rescue the knights themselves. When they arrive at the Labyrinth, Jake suggests they merely stretch over the walls, but Finn points out a nearby sign that reads "No Cheating Or You DIE." Jake then comes up the idea of wrapping his legs around a tree stump and stretching his body through the Labyrinth to prevent the duo from getting lost. They are only a few feet in the Labyrinth when they find the Hot Dog Knights that sent the distress signal, who are afraid that they will be eaten. Not long after Jake explains that he and Finn are there to save them, one of the knights tells of a magical wish-granting creature at the center of the labyrinth. Finn and Jake seize the opportunity so that everyone will receive their wishes when they reach the end of the Labyrinth. As they descend deeper in the Labyrinth, Finn and Jake sing a song. Afterwards, Finn notices that Jake's stretching powers are pushed closer and closer to their limits and his strength begins to wane, as he is also forced to use his powers to combat various traps. While Finn suggests that they should turn back for Jake's own good, the knights cheer Jake on, and so they continue in spite of Jake's weakening condition. As the group draws closer to the center of the labyrinth, a giant statue holding a puzzle poses as what appears to be the final obstacle. Even though Jake is so stretched out he cannot even close his eyes, he continues to push himself at the request of the knights. He solves the puzzle, allowing them all entrance to the center where they meet Aquandrius who will grant their wishes. They enter the chamber, accidentally leaving one of the knights behind who winds up breaking the puzzle. The door slams shut and crushes Jake, trapping the others inside as well. Finn thinks that all they have to do is wish themselves out, but when one of the knights rushes for the Eel, he is killed by a trap. Once again Jake strains his body so that he can carry the others across the lethal hidden traps in the floor. Aquandrius warns them that there are "no do-overs." The remaining two Hot Dog Knights take their small magical orbs and wish for a box and to blow up (the second who wished to blow up wanted to grow in size, but exploded instead.) Jake absentmindedly wishes he was not so hungry, and receives a sandwich. With only one wish left, Finn must ultimately decide whether or not to save Jake or wish for the Ancient Psychic Tandem War Elephant that they both wanted. In the end, he wishes for the elephant, and has it wish for Finn's friends to be saved. Jake and the Hot Dog Knights appear alive and well, and they leave with Finn on the elephant, with Aquandrius cursing them as they leave. 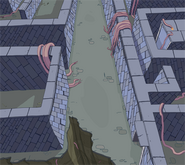 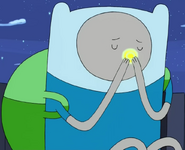 "I pushed myself too far. I'll never fall victim to peer pressure again."