Aleks Sennwald[2]
Graham Falk[2]
Adam Muto[2]
"The Light Cloud" is the eighth and final part of the Adventure Time miniseries "Islands" and the twenty-seventh episode in the eighth season of Adventure Time. It is the two hundred and fifty-second episode overall.[1]

Finn confronts the power behind Founders Island, but will he ever return home to Ooo? [1]

After meeting his mother's consciousness, Finn is flabbergasted when his mother insists that he stays forever. Minerva showcases a simulation where Finn and Jake's ship is destroyed by the Guardian before they can leave in order to dissuade Finn from leaving. Meanwhile, Susan is still attempting to reignite Frieda's desire for exploration. Finn and Jake explain their lives in the Land of Ooo, but Minerva finds it too dangerous for Finn to live. To prove his point, Finn shows Minerva his memories, but Minerva remains adamant on Finn staying permanently. Finn claims he can convince the humans to leave, but Minerva undermines this effort.

Outside, Finn tries to convince the humans to grow out of their shell of fear, but the humans complain that it is too hard. Jake accompanies him in showcasing the wonders of Ooo: the magic, kingdoms made of candy, and depressed men. They proclaim that fear is needed for a person to grow, and the humans collectively rally in support of the idea. Susan overhears the commotion and brings Frieda outside. Upon hearing the speech, Frieda's fervor for exploration returns. The success of Finn's arguments make Minerva nervous, so she deploys her Minerva Bots to intervene. The Minerva Bots shoot a force field into the sky, threatening to upload the consciousness of everybody in the surrounding islands into the Better Reality software. While everybody is paralyzed by fear, Finn returns to his mother.

Minerva argues to Finn that he forced her hand, to which Finn bargains his consciousness to be uploaded into the Better Reality software in place of everybody. Minerva tries to explain that she is just helping everybody. Finn responds by showing Minerva his memories of helping people in Ooo. Minerva, convinced by what she saw, decides to let Finn go knowing that a chaotic world molded him into a helper like herself. The Minerva Bots disable the enveloping force field and stand down.

At the island's port, Finn invites the humans with him, but the humans generally decline due to the sudden decision to leave. Frieda accepts this invitation and travels with Susan. Frieda and Susan, from their Transport ship, lure the Guardian out of the water with a ship hologram while Finn and Jake climb into the Guardian's core to upload Minerva's consciousness, who orders the Guardian to finally stand down as their protector. Frieda and Susan part ways with Finn, Jake, and BMO and decide to make new memories together.

Aboard a freighter ship captained by BMO, Finn dons a Better Reality helmet, which transports him to his old domestic home in the island. He is greeted by Minerva's consciousness, and they share a parting hug. Finn asks if she is the same person after sacrificing her physical body and uploading her consciousness, to which she replies that she doesn't know for sure but feels like she is. Minerva disappears after the ship moves out of the island's signal range, leaving Finn alone in the virtual reality. Finn sheds a tear as he says goodbye. 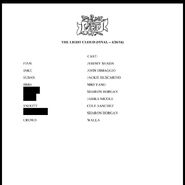