Tom Herpich
Skyler Page[1]
"The Lich" is the twenty-sixth episode in the fourth season of Adventure Time. It is the one hundred and fourth episode overall.

Finn is led by "Billy" on a quest to save the world and beyond from The Lich.

The episode begins with Finn having a dream about the Cosmic Owl screeching, Billy kissing his lady, and the bear and the snail reading the Enchiridion. At one point, while he is laughing, Billy's image flickers to The Lich and back again. Suddenly, the snail kills Billy and Finn wakes up. He tells Jake about his dream and Jake says it is a premonition dream. He then says they should go tell Billy because he was in the dream and then drives Finn to Billy's Crack.

Once there, Billy yells at them saying that its 3 in the morning and asks why they are there. Finn says that they wanted to make sure he wasn't dead, to which Billy asks why they would think that, and Finn proceeds by explaining about the dream. Billy asks them if they want to save all life from the Lich and they agree. After they head out. Billy tells them that they need to collect all the magical gems from all the princesses and Ice King's power crystals that protect them from the Lich.

After some time spent collecting crystals, the group stops to rest for a bit and Jake asks Billy how many more crystals they need. Billy indicates that there is 1 left. Finn gets hungry and rummages through Billy's knapsack looking for candy, finding the Enchiridion after being smacked out by Billy and asking why he had it. Billy says that he found it in the mouth of a bear and Finn blushes with embarrassment as he remembers giving the book away to the bear. Billy says it has magical powers and tells him to turn the sword on the cover of the book which Finn does. The circle on the front opens up showing 9 slots where all the gems go in mystically (except Lumpy Space Princess's whom just falls over the book) and shows a brief diagram about what would happen if all the slots where filled. At first, Jake and Finn wonder what all the holograms are, but Billy uses the blue crystal on his face to activate another hologram. A man named Book-o (who bears a resemblance to a Key-per) appears and explains what the first set of holograms represent, which is all the known universes and dimensions, and how they are connected. Jake tries to play around with it, but it frightens him and he calls it off. Book-o goes on to mention that in the center of the universe is the Time Room where Prismo dwells. Billy states that he's going to push the Lich into there, seemingly to place the Lich in non-existence.

They then go to the Candy Kingdom to get Princess Bubblegum's crystal (she is experimenting with little creatures, cutting off their legs and reattaching them) and Finn breaks through the roof and asks for the crystal on her crown. Princess Bubblegum is shocked and refuses, and Finn tries to grab it by force, during which Princess Bubblegum accidentally slices Finn's cheek with the scissors she is still holding from her experiments.They stare at each other for a brief moment, both stunned, and Princess Bubblegum says "That was an accident." Finn hisses, removes the gem aggressively from her crown and runs off with it with Princess Bubblegum not far behind. Once outside, he then puts it in the final slot and the book's pieces start to fall off as the Enchiridion turns black (or to some rock-looking substance). Princess Bubblegum runs out telling him that Billy is really the Lich and not to give him the book.

Just as she says this, one of the Gumball Guardians gets up and blasts Billy, detecting the Lich's presence, thus revealing half of the Lich's true face. The Lich then asks for the book. Finn realizes that the Lich "messed Billy up" and after dodging a grasp from him smashes the book with his knee, but that action accidentally opens up a wormhole, to which the Lich is pleased and thanks Finn, tauntingly. As the Lich tries to pass through, Jake grabs him, reacting to Princess Bubblegum's request, and stretches as to not go through. Jake, though, is slowly dragged into the portal as the ground under him gives way. Finn tries to stop Jake from getting pulled in but instead is pulled in with him. The episode ends with a boy who looks similar to the Finn (but looks like the version of him from the floor mirror in "King Worm"), playing his flute with a regular dog who looks just like Jake, then his mother (Who is temporarily named: Finn's Mother, until further notice) calls him in for what she says is "something important" and the episode ends mysteriously as he heads inside with his dog.

Adventure Time - The Lich (long preview)
Long preview.
"The Lich" Animatic
The animatic.
Add a photo to this gallery 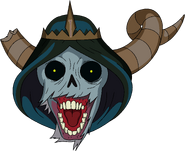 Finn destroys the Enchiridion.
S4e26 face - half Lich half Billy.jpg
The Lich smiling at Finn

Retrieved from "https://adventuretime.fandom.com/wiki/The_Lich_(episode)?oldid=356790"
Community content is available under CC-BY-SA unless otherwise noted.