watch 01:47
Wiki Targeted (Entertainment)
Do you like this video?
Play Sound

The Grotto of the Water Nymphs

The Grotto of the Water Nymphs

Underground of the Tree Fort

The Water Nymphs are seen partaking in frog smashing to make frog hot dogs in their grotto. The grotto also has a whirlpool, which sucks people into another dimension and which Finn and Jake enter in "Beyond the Grotto."

The grotto is underground, and so all of its pools of water and structures are made of hard dirt and grass. The water is green and falls off tiny waterfalls that drop higher up the grotto from small lagoons.

The grotto also has a whirlpool with fauna around it. 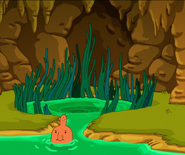 A view of the dimension only accessible through this grotto
Add a photo to this gallery
Retrieved from "https://adventuretime.fandom.com/wiki/The_Grotto_of_the_Water_Nymphs?oldid=812588"
Community content is available under CC-BY-SA unless otherwise noted.