Jesse Moynihan
Ako Castuera
"The Great Bird Man" is the thirteenth episode in the fifth season of Adventure Time. It's the one hundred and seventeenth episode overall.

When Finn and Jake get lost in the Bad Lands, they are saved by the ex-Goblin King.[1]

This episode starts with Finn and Jake walking in the Bad Lands, and sweating from the intense heat. Finn calls Princess Bubblegum using his Holo-pendant, she asks them how the mission is going searching for the "Great Birdman." Finn says that there is still no sign of him, and asks why the birdman is so dangerous. Princess Bubblegum replies that she needs them to find everything about him and report back to her. Finn says goodbye and throws the Holo-pendant away. After that, they go on in search of the bird man.

After traveling so long in the intense heat, they soon became very tired and hallucinate, when a bird creature comes to save them.

Finn wakes up after Xergiok gives him water, Finn asks where he is, and Xergiok says they are where him and his bird friends dwell. Finn asks if he is the bird man,  and Xergiok replies that it is what they called him nowadays. He then states that when he first met Finn and Jake he was known as "Xergiok the Goblin King." Finn and Jake are shocked, and Xergiok says that when they met him, he was crazy for spanking goblin hams; he was cruel, selfish and brutal, and then he says that everything changed when he was defeated by them. Jake sarcastically says that when he put on his new shades then everything is different.  Xergiok replies that his was change was deep and explains that he is just wearing the shades because a wizard took his eyes after he "miffed him off." Xergiok then begins to wonder what the wizard did with his eyes. Finn and Jake see his eyes tangled in his beard and are confused to why he has not noticed them there. Xergiok says that that was just the beginning of his change and he started meditating and doing yoga and now he can see with his heart and smell with his soul.

Xergiok starts to call his bird, and Finn asks what is he is doing. Xergiok continues calling his bird, and it soars out of the sky flies to him. He then tells Finn and Jake to climb on Taffy to go downstairs to eat, but Jake suddenly stops Finn and he says that they will follow him down because Jake needs to stretch out. Xergiok lets them and tells the duo to follow him. The former Goblin King and his loyal bird flies down the mountain, Finn riding on Jake as they descended, following Xergiok. Finn and Jake talk about how Xergiok is crazy, about how he has not noticed his eyeballs in his beard, and about him having evil intentions behind his deep change. Finn replies that he will find out.

The duo finally descends into a pit populated by Taffy's bird people. Xergiok appears and tells them how nice and cool the place is. Once he hears the babies, he proclaims that it is "num-num" time, which was not shown. Finn and Jake find Xergiok dizzy after feeding the baby birds, but he replies that he will just excuse himself. The duo get their chance to investigate and eventually run into a cave filled with "weapons." Jake explains that one of the "weapons" has a letter from the hospital on it, which makes Finn surprised. The letter says: "Dear Xergiok, thank you so much for your donation. The kidneys fit great." This does not make Finn and Jake content as to Xergiok being good, and still go on to do more investigations. Finn and Jake trip and bump into a bird. The surprised bird flies up, bumps its head on a rock, falls, and gets its legs pinned down by the rock. Xergiok receives mental links from his fellow bird and goes to rescue it (after rolling off his "nest.") He unpins the bird's legs by lifting off the rock, followed by casting a healing spell. Finn and Jake are shocked when the bird's injured leg changes into another leg that resembles Xergiok's. The bird recovers and Xergiok manages to find the duo behind the bird. The former Goblin King explains that he does not use magic and instead manipulates the species with vibrational channels, meaning that the injury had transferred to him. He shouts in pain and also proclaims that he loves his birds more than he loves himself. He proceeds to talk about dirt when Finn confronts him about his eyes. Jake stops his brother because he still has doubts about the change, but Finn disagrees. Although the duo tells him the location of his eyes, Xergiok still cannot find them and thinks Finn and Jake are joking. Finn helps Xergiok by bringing his hand to his eyes in his beard, which made Xergiok surprised to find them. Finn explains that the reason why they had not told him earlier is because they thought that he still might be evil. Xergiok then asks the duo to help him get onto his bird's back to be high in the clouds when he gains his sight back, after removing the eyes from his beard. All of the birds accompany the trio to the sky to restore his eyesight. Although Xergiok puts his eyes in his eye sockets, everything around him is still abstract. He sings "Real Power" and after the song, Finn asks how Xergiok is, to which he replies that it is overwhelming, and his mind is changed again to spanking goblins. But, to the duo's relief, Xergiok leaves his past and thanks them for finding his eyes.

To the duo's curiosity, Xergiok questions them about the current king of the Goblin Kingdom. Jake replies angrily that it is Whisper Dan, and Xergiok "disregards" it, saying that it is cool. To Finn and Jake's confusion, the birds fly them to the Goblin Kingdom. The former Goblin King explains that now he is wiser, and he can rule the kingdom again. He becomes insane about spanking those who disagree about him ruling and from the castle, two goblin guards hear Xergiok's laugh and eventually see him with a flock of birds.

Xergiok transfers his injured leg to Jake's leg so he can have the ability to walk and stretch. Jake shouts in pain while Finn is still shocked about his decision. The flock leaves in depression of losing the blind old Xergiok and because he spanked one of their noses. Xergiok suddenly becomes hurt at the loss of his bird friends, which leads to the duo scolding him and to him transferring back again his injured leg. Xergiok gives Finn his eyes and demands him to bury them forever for he will not need them again. Instead, Finn returns them to his beard. Xergiok leaves, blind and injured. Finn and Jake hope that he will find peace.

From the top of the castle, the two goblins watch Xergiok sink in the water in sadness but eventually become happy, splashing in the water. There, the former Goblin King finds a mermaid and exclaims that she is his girlfriend from now on, to the surprise of Finn and Jake. 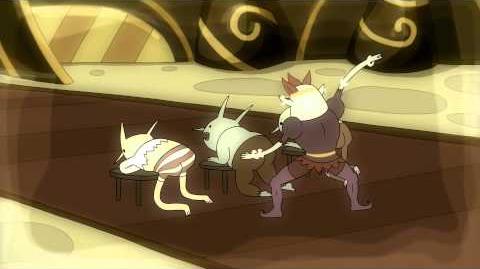 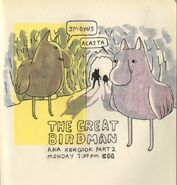 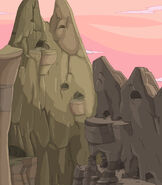 Princess Bubblegum under the sea with the sad mermaids.

Have some water, Finn.

Putting those eyeballs back in was a big mistake.