The Gift That Reaps Giving

"The Gift That Reaps Giving" is the fourth and last short episode that is part of the sixth season of Adventure Time.

Death tries to make a mixtape for his girlfriend, Life.

Death tries to think of a present to give to his girlfriend, Life, for her birthday. He's sitting in his car in his castle when he hears the song "Lonely Bones" by Caramel Sally and tries to record it on a mixtape. The mixtape breaks spewing tape lines out, and Death furiously breaks it in half.

He tries his luck in the Candy Kingdom on a Candy Girl listening and dancing to the song on her mixtape. He pulls out a mini-scythe to try and kill her to steal her mixtape before he is interrupted by Finn and Jake. Death comes up with an excuse that he was partaking in an activity called "bushing." Finn and Jake get interested in this activity but Death's luck runs out as the Candy Girl dances away.

Death meets his girlfriend, Life, where he gives her a CD. He says he's sorry for not giving a mixtape, but Life is pleased with her gift as she explains how she can finally listen to the song in her dad's car. She gives Death a kiss and Death too is satisfied. 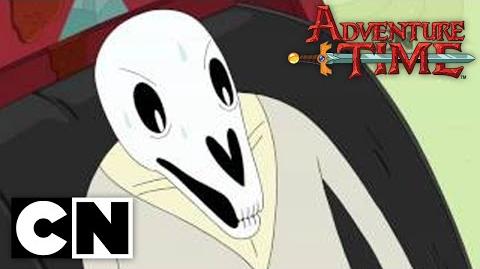 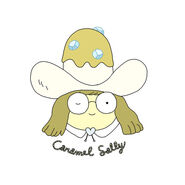 Retrieved from "https://adventuretime.fandom.com/wiki/The_Gift_That_Reaps_Giving?oldid=822658"
Community content is available under CC-BY-SA unless otherwise noted.