Start a Wiki
watch 01:10
Episode “First Investigation” Recap
Do you like this video?

Aleks Sennwald[2]
Hanna K. Nyström[2]
"The First Investigation" is the eighth episode in the tenth season of Adventure Time. It is the two hundred and seventy-fourth episode overall.[3]

Finn and Jake are tasked with investigating reports of a haunting at Joshua and Margaret's old office.[3]

Kim Kil Whan tells Finn and Jake that he had sent one of his employees, Renny Hamlond, to check on one of his properties, Joshua and Margaret's old office, but Renny left the place terrified and shaky and has remained in that state. Kim Kil Whan believes someone terrifying has taken residence in the building and asks Finn and Jake to have it removed. Finn and Jake speculate what is haunting the place. Finn mentions it may be a ghost, and the two then believe it may be the ghosts of Joshua and Margaret and get excited.

Finn and Jake arrive at the building excited to see their parents. Finn notices a broken window but sees no signs of ghosts or anything. Finn and Jake then recall many moments they had spent at their parents' office. The two then hear a ticking noise but cannot track where it came from. Finn and Jake return to the living room only to see it decorated with furniture that was not there prior. Finn and Jake then see a videotape on the shelf suddenly fall to the ground, making them believe there is a poltergeist present.

Finn and Jake play the tape and see it is Joshua and Margaret on the tape recording about a time where they saw a ghost. Finn and Jake then go through the place searching for ghosts. Finn hears the ticking noise again, which is followed by a ghost, and realizes the ticking noise indicates a ghost. Finn then sees three ghost babies and realizes they're the baby versions of him, Jake, and Jermaine. Finn interacts with them, realizing they're not ghosts but timeslips. Jake armors up with pots and pans and prepares to fight the ghost. He enters the bathroom only to notice its different appearance and the presence of a mole and leaves. Jake reenters with the room appearing different again, and this time with the presence of a human woman who seems to have lived long ago. Jake, though terrified, reenters the bathroom now back to normal but hears a noise coming from the window.

Finn is still holding the baby versions of him and his brothers and notices that they can see him as he sees them. The Shape-Shifter then appears, looking in the window at baby Jake, who then disappears. Jake then runs in terrified and recalls seeing the "most messed up thing," his birth, in which he came out of Joshua's head and danced and sang. Jake, however, does believe that he was born that way and vows to attack the next ghost. Renny Hamlond then comes to the door, going to check the building as Kim Kil Whan had told him to do so earlier. Jake runs in and grows giant and monstrous, scaring Renny and showing that's what had traumatized him, as he and Jake both were timeslips.

Jake was terrified, but Finn assured him that they were not experiencing ghostly phenomena; they were experiencing timeslips. Finn and Jake followed one of the ghostly timeslips upstairs. They then realized that the cause of the timeslips was Clock Bear. Clock Bear appears sick, but they wind him up and all the time slips disappear. Finn in this time writes an "I love you" message to Joshua and Margaret, hoping they will see it in their time.

Jake then goes to the alley where his birth occurred, and he accepts that what he saw was true. The Shape-Shifter reappears and touches Jake, turning him blue and telling him they need to leave forming a portal. Finn speaks to Kim Kil Whan on the phone, telling him about what had happened. Finn goes to the alley to find Jake but only sees a "BRB" letter from him. 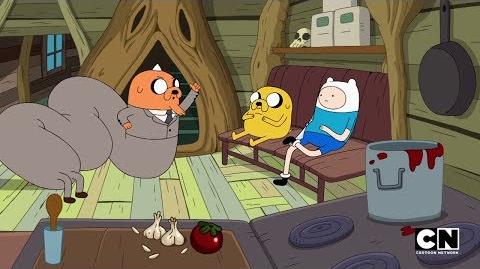 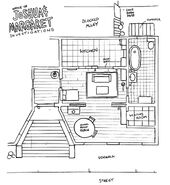 Retrieved from "https://adventuretime.fandom.com/wiki/The_First_Investigation?oldid=828142"
Community content is available under CC-BY-SA unless otherwise noted.