"The Eyes" is the second episode in the second season of Adventure Time. It's the twenty-eighth episode overall.

Finn and Jake return to the Tree Fort after seven days of sleepless adventure. They recap their adventures and then go to their beds. Finn quickly wakes up when he sees a strange horse outside the window, staring at them. Jake shuts the blinds and they go back to sleep. Shortly after, however, the moon appears in the sky and creates a silhouette of the horse in the room. Finn and Jake go outside to try to figure out how to get rid of that horse. Finn tries asking him to leave, but the horse does not seem to understand and sticks his tongue out at them while enlarging his pupils. Jake diagnoses the horse with "whacked-out poo-brain." He and Finn try to push and pull the horse off the hill, but are unable to do so due to the horse's ridiculous weight. Jake grows larger and grabs the horse and puts him down on a far hill, but the horse rushes back. Jake puts a blindfold on the horse so he will not stare at them, but the horse slouches his eyes down to see. Jake then tries to lure the horse away from the hill by playing Beethoven's Moonlight Sonata on his viola and then Mozart's Eine Kleine Nachtmusik, which attracts snakes.

After lots of failed plans, Jake suggests they kill the horse, but Finn objects. They soon agree on dressing the horse as a bunny and letting a giant hawk drag him away. After a couple of hawks come and take the horse away, Finn and Jake run back to their tree fort to sleep. But sadly, the hawks drop the horse inside the house. Finn and Jake begin arguing, but they come to realize that the horse is tearing them apart and stop. Finn gets angry at the horse and kicks the horse in the bottom.

It is revealed that the horse was really Ice King in an inflatable costume. Finn and Jake question the wizard and asks why he was spying on them. Jake thinks that Ice King was trying to learn his bedtime secrets and asks Ice King if he found out that he sleeps in the nude. Ice King does not reply and instead he takes the horse costume and walks away. However, as Ice King is walking out the door, Finn kicks him and then Jake gives Finn his sword. Ice King and Finn start fighting and Ice King knocks Finn's sword out of his hand. Jake jumps in and tries to hurt Ice King, but he throws Finn and Jake into a group of snakes. During this fight, Finn and Jake keep asking why Ice King was spying, but Ice King refuses to tell. Ice King tries using one of his ice powers, but all this does is make a couple of ice cubes hit Finn and Jake.

Finn kicks off Ice King's crown and then chucks him at the wall. Ice King is then sitting on the ground, Finn holding a sword to his throat. They threaten that if Ice King does not tell them why he has been stalking them, they will cut off his stupid head. Ice King admits that he wanted to know how to be happy. He says that he is always so glum, but when he sees Finn and Jake, they always look like they're having fun. Ice King explains that he dressed as a horse to spy on them and learn to be happy but before Ice King can finish, Finn and Jake fall asleep by his sides. Ice King questions if all he needs to be happy is a good night's sleep. He closes his eyes next to them and, after a short pause, says he is still not happy.

Finn & Jake sleeping after the hawks removed the horse 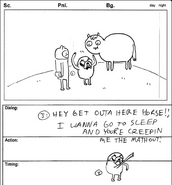