The Enchiridion (which translates to "The Handbook" or "The Manual") was an ancient book with codes of conduct, guidelines, and other helpful information for heroes. The book had great power which allowed it to tear open worm holes between dimensions in the multiverse. It was broken into pieces after turning to stone by Finn in "The Lich" in order to stop the Lich from gaining access to the multiverse, but, as it turned out, by doing this Finn made the portal to the multiverse. (See "The Lich" for more details.) It was revealed in "Winter Light" that while Finn and Jake were in the Farmworld Dimension during the events of "Crossover," Finn brought the Enchiridion from that timeline back with him.

The book was discovered by archaeologist Simon Petrikov (Ice King) sometime before the Mushroom War in the Hindu Kush mountain range in Pakistan,[2] as revealed in a newspaper clipping in "I Remember You." After he found it, he presented it to a museum. After the war, the Hero's guide somehow ended up in the hands of Key-per at Mount Cragdor, guarded by Mannish Man the Minotaur.

It first appeared in the episode "The Enchiridion!" in which Finn passes a series of trials to obtain it.

Finn kept the Enchiridion, and it subsequently appeared in the episode "Evicted!," when he threw it at a worm on his bed. The book makes another notable appearance in "Another Way" in which Finn reads about magical Cyclops tears while the Clown Nurses are healing his broken foot. Its next appearance was in "In Your Footsteps." Finn used it to knock the food out of the Bear when he was choking. Later, Finn gives it to the Bear so he can learn to be a hero, but it is soon revealed that the reason the Bear took the book was to give it to the Snail - who was being possessed by The Lich.

In the episode "The Lich" the book is shown to have intense magical properties, allowing a user to be able to have access to all of the multiverse's many dimensions. This is done by turning the sword on the front of the book to the right and inserting the nine gems of power into their appropriate slots. It was later destroyed by Finn by having it bashed against his knee. It opened the portal as soon as it was broken.

In "Bad Little Boy," Doctor Prince stole the Enchiridion and tossed it back to Fionna. However, it was actually a bomb disguised as a book. Ice King then stole the real book and gave it back to Fionna. Although, this is merely part of Ice King’s fan-fiction, and isn’t in the actual continuity.

In "Crossover," Farmworld Finn and Farmworld Jake (Possessed with The Lich's spirit) used the Farmworld's Enchiridion to build a portal to the Multiverse. Due to the possibility of destruction to other dimensions, Prismo sent Finn and Jake to Farmworld to stop them.

In "Winter Light" Betty Grof needed the Enchiridion to fix the Land of Ooo from the four elements. In order to do this the gems from the 3 elemental princess' crowns need to be inserted into the book. Jake said that the book was destroyed but Finn revealed that during the events of "Crossover" he brought the Farmworld's Enchiridion back with him to their timeline.

Throughout the Elements miniseries, Betty Grof uses the spells in the book in order to fix Ooo.

In "Skyhooks II" when Betty gained all the gems from Finn, she got too carried away. She wanted to use the book to go back in time and prevent Simon from becoming Ice King and possibly even stop the Mushroom War. The plan goes wrong, but Finn later obtains the book, and with the help of Ice King's crown and Lumpy Space Princess' anti-elemental lumps, the Land of Ooo turns back to normal.

The Enchiridion is a dusty, faded, old book. It is in bad condition, with pages, bookmarks, and tabs sticking out of it. There is a bird, a skull, some grapes, and a sword in the center of the cover. Around the center is a ring of six gems. There are also two shields at the bottom and the word "Enchiridion" on the top front. Binding the book's corners are metal caps. On the back 8.13.21 is written. (This is part of the Fibonacci sequence, where each new number is calculated by adding the two numbers preceding it.)

The middle of the book contains nine slots that can be filled with gems. To access the middle of the book one must twist the sword to the right. When gems are placed in the correct order, lights shine through the gems on the cover and the book vibrates wildly. The skull starts chanting and then explodes. During which the grapes wither the leaf falls and the bird flies away. The sword starts to slice the book in half down the middle. Once done slicing, the blade moves into the groove where a black substance emerges from it causing the whole book to turn into a dark brown stone.

The Enchiridion in the farm world that appeared in "Crossover" appears differently than the previous one. In the center of the cover has a sun and a moon on opposite sides of a diamond, with images of the nine gems needed to activate it, across the top half. In the middle is a right hand, with a skull by the left and a pear by the right, below it are a scythe and the teeth of a key. When opened the nine gems fit in a pattern similar to the other one.

The nine gems along with their owners are shown here (not in the order they must be inserted):

Four others, owners not depicted in "The Lich."

Note: the yellow star from Lumpy Space Princess's head was tried, but did not work.

The Enchiridion is, as stated above the heroes guide, indicating it is used to advise heroes in their journeys. The book contains chapters, each relating to a different subject like "How to Kiss a Princess." The Enchiridion also contains the ability to create an artificial passage into different dimensions explained in the episode "The Lich." To activate this portal one must turn the sword on the cover to the right, which opens a hidden compartment where the gems of power need to be put. Placing all the gems in their correct positions, will cause:

After the sword completely cuts the middle of The Enchiridion into a loop, a black substance will ooze from the crevice, and turn The Enchiridion to a brown stone. Upon breaking the stone, the portal to the other known universes and dimensions will open.

After the Enchiridion was turned into the stone and broken by Finn, it was presumably destroyed, and has not been seen in Finn and Jake's world, but it was shown in "Bad Little Boy" when it appears in Ice King's fantasy.

The Farmworld version of the Enchiridion operates differently than its main timeline version when opening a multiverse portal. After placing the gems into position, the book hovers in the air, front facing down, and fires an orange laser in a circular motion into a pool of green fluid (possibly the Farmworld Lich's Well of Power) before bathing the pool in an orange glow that shows the network of universes. When Jake knocks the Lich-possessed Farmworld Jake's hand into the portal pool, it divides across all of the universes shown in the projection.

In the episode "In Your Footsteps," Finn states that he and Jake only use it for "sitting on ... when the grass is wet and stuff," a misuse of the ancient text.

Billy (The Lich) states that the book holds great power; at this Finn blushes, because he knows he has misused The Enchiridion, and then carelessly gave it to the bear.

Chapter Four is titled "Didactic Padding That The Hero Should Duly Ignore" as seen in The Adventure Time Encyclopædia. Part of chapter four can also be seen. It reads:

Chapter five is titled "How to Kiss a Princess," which Finn found very useful and embarrassing, considering he blushed as he read it. He glimpses it when he first opens the book. It reads:

Chapter nine appears to end in a short story. What can be read clearly is:

Finn reads chapter ten, The Cyclops, in "Another Way." "Deep in the Forest of Trees, there's a cyclops whose magical tears can heal any wound." Part of the chapter can also be read:

This chapter appears in Finn's dream in "The Lich." Two of the pages appear before the snail turns into the Lich. 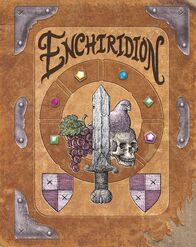 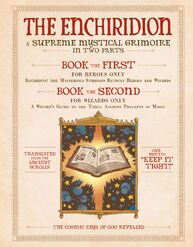 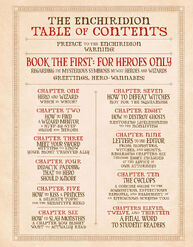 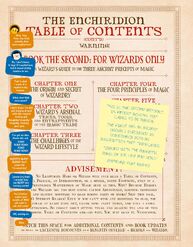 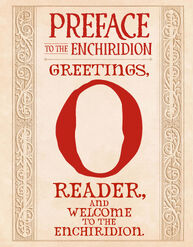 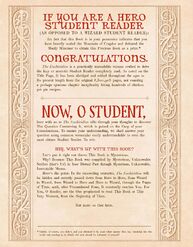 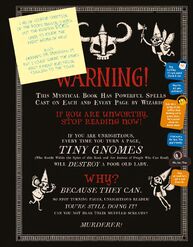 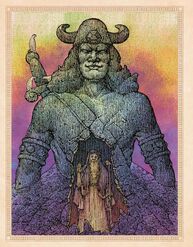 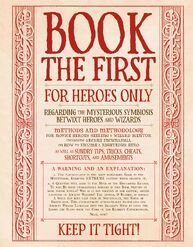 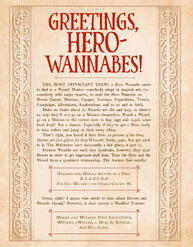 Chapter One And More 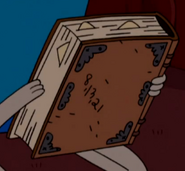 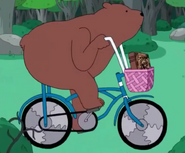 The Bear riding a bicycle with the Enchiridion.

The Bear brings the Enchiridion to the possessed Snail.

Betty using spells with the book