During a mishap accidentally caused by Finn, Princess Bubblegum becomes green and bald, and blames the Duke of Nuts for it, thus making Finn think he's a bad guy. Finn and Jake have no choice but to find the Duke of Nuts on Bubblegum's order.

The episode takes place in the Candy Kingdom, where Finn and Jake are throwing bottles filled with magical spells for their amusement, such as Caturday Surprise. They witness Princess Bubblegum kicking the Duke of Nuts out of the palace and decide to take no part in it. They continue throwing bottles and Finn finds a green one shaped like a boomerang. He attempts to throw it at the wall to see what it does, but it flies the other way and into the palace window of Princess Bubblegum's room. The bottle hits her and she turns green and loses most of her hair. She believes the Duke did this, as he runs away in panic. They come in to find a doctor trying to help Bubblegum, who is distraught in her current condition.

She is wearing a big gray suit filled with medicinal milk that will change her back in five days. But Bubblegum says tonight is the Grand Meeting of Ooo Royalty and needs to return to regular right away. As Finn tries to clear up what happened, Bubblegum says that she thinks the Duke of Nuts did it and has always been a bad guy, for unknown reasons which are classified, and she would never forgive the person who did this to her. Princess Bubblegum suddenly goes crazy and orders Finn and Jake to find the Duke of Nuts and arrest him for his "crime". Scared that Bubblegum will hate him forever if he tells the truth, Finn agrees to go find the Duke.

Finn and Jake travel to the Palace of Nuts and go inside, to find the Duke's wife, the Duchess of Nuts. She has heard the news of the Duke's "crime" through the nuts and explains to the boys that the Duke was once a wonderful man; he pet dogs, kissed babies and laid with her underneath the cashew bushes. But now the Duchess believes the Duke has gone rancid and the nuts tell her he must be executed. She freaks out Finn by telling him to listen to the nuts, which results in Finn subsequently running out of the palace. Finn wonders why he and Jake are trying to arrest the Duke if he was such a nice guy, and suddenly the pair see someone who looks like a peanut, and chase after him, thinking it is the Duke. It turns out he is the Duke's son, Marquis of Nuts, who vows to kill anyone who tries to arrest the Duke.

The real Duke of Nuts shows up and comforts his son, while Finn still wonders why everyone hates the Duke if he was so nice. Jake explains that tons of people hate him already. The scene then changes to a squirrel reading a holographic newspaper and wonders why Jake will not publish his letters and says he hates Jake. The scene goes back to the boys, and the Duke of Nuts gives them daisy crowns for waiting patiently. The Duke asks if Finn has any pudding, which he does, and so he gives it to the Duke. When he offers the Duke a spoon, he is shocked to see that the Duke already ate the whole thing, including the cup. The Duke explains he has a problem with pudding because he has a pudding deficiency, so whenever he goes to the Candy Kingdom, he always eats the entire pudding pantry and that is why Bubblegum hates him so much. Finn and Jake realize the Duke is too nice a guy to be involved in this crime, and Finn comes up with an idea to save everyone's reputations.

Later that night, when Princess Bubblegum is traveling to the grand meeting in a carriage filled with medicine milk, Finn comes and stops them and tells Princess Bubblegum that an assassin is in the woods trying to stop Bubblegum from reaching the meeting. The "assassin" (Jake) comes and Finn "fights" him. Jake acts as if this is not the real Princess Bubblegum and leaves, with the Duke of Nuts coming out and saying that because he turned Princess Bubblegum green and bald, he saved her life. Bubblegum, however, is not convinced and orders her Peppermint Butler to arrest the Duke, but he is too short to reach his arms. Finn decides to stop this, and confesses the truth to Bubblegum.

She then calms down a little bit, and says she would not remain mad at Finn forever. But she still hates the Duke of Nuts for always eating her pudding supply. Finn then explains the Duke's pudding deficiency, saying he could not control himself around pudding. Bubblegum "forgives" the Duke for the misunderstanding, but whispers into Finn's ear that she does not believe this. Bubblegum comes up with the idea to hide her ugliness by sending Finn and Jake go to the grand meeting instead, wearing Princess Bubblegum wigs and pretending to be her, and they are given a list of lines she would say.

Jake discovers the person sitting next to him is Marquis of Nuts, who still wants to kill Finn for trying to arrest his father, and the host is discovered to be the Squirrel, who wants Jake to notice him and read his letters. Jake is still unaware. In a fit of rage, Marquis of Nuts and the Squirrel attack Finn and Jake together. The scene freezes before the episode ends soon after. 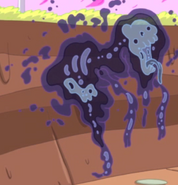 This is the first bottle thrown. 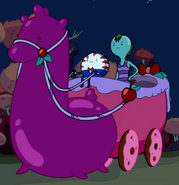 Picture of an unknown person, possibly Princess Bubblegum's relative because of the skin color and the hair

These pictures are in the same room, along with some simple images of a star, a smiling face and a frowning face. The unknown female's picture is above where a table with a teapot on it is kept. Bubblegum bulls Finn and his outstretched arms away from the photo. 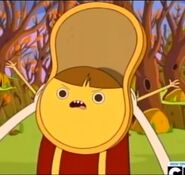 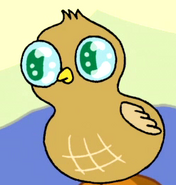 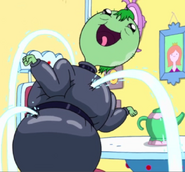 "People make mistakes. It's all part of growing up, and you never truly stop growing."