"The Diary" is the thirtieth episode in the sixth season of Adventure Time. It is the one hundred and eighty-sixth episode overall.

Jake's son T.V. discovers a lost diary and sets out to solve a decades-old mystery.

The episode begins with a game screen, which is revealed to be a computer game being played by T.V. on a computer at Lady Rainicorn's house. Lady Rainicorn is worried about T.V's computer gaming addiction, as Jake is seen behind reading a newspaper. Jake consoles Lady Rainicorn's worries and then asks T.V to get him a chocolate bar. T.V reluctantly agrees and goes out to get it.

While on his way, an old man greets him, but T.V. teleports away and materializes outside the Candy Kingdom. He goes under the Chocolate Bridge and pulls out a chocolate bar from underneath. As he pulls it out, he falls in a nearby chocolate puddle. He discovers a diary in the puddle wrapped in a plastic bag, which he takes out to examine.

He sits on the nearby ground and opens the diary to read it. He discovers this diary to be of some unknown person named B.P. In the diary, "B.P." writes about her daily life as a teenage girl. T.V. travels around different areas of Ooo while reading this diary. The diary reveals that "B.P." wore braces, used to write songs that were not very good, and worried about whether she would find a "cool guy."

The focus of the diary entries become more about guys. "B.P." reveals that her classmates Taffi and Mochi are the most popular in the school, and that she is jealous of them. Later, she gets excited as she reveals that Justin Rockcandy asked him out on the semi-formal. T.V. is intrigued.

The diary now focuses on Justin and "B.P."'s relationship. T.V. reaches Lady Rainicorn's house as night falls, but instead of going inside, sits outside and keeps reading the diary. The latest entry reveals that "B.P." and her boyfriend have kissed. Later, in his room, T.V. keeps reading the diary. "B.P."''s birthday was nearing, but she didn't want to celebrate. Justin had asked her to meet him at Love Tree Point, saying he wanted to give her a present. After some pages, the author says that she should "tell him," but after that, the rest of the pages are torn out. T.V.is frustrated.

The next morning, Lady Rainicorn is preparing breakfast for her family and asks T.V. to come over and have breakfast with her and Jake. T.V. says he isn't hungry, grabs an apple, and goes out. T.V. again goes out to the chocolate bridge, saying he has to get into the mind of this kid. He then starts to role act as if he were "B.P." Suddenly, his imagination takes over. He is riding a roller coaster and falls in a chocolate moat.

Giant images of Taffi and Moch appear and start to talk about the CD Mochi has bought. Then, a giant Justin comes from under T.V. and repeats the same phrase the diary told him, which was to meet at Love Tree Point. T.V. again gets frustrated.

At Lady Rainicorn's house, Jake and Lady are playing a game of Canasta. When Jake wins the game, he says that Lady is off her game, saying he has never won a canasta. Lady then says that she is worried about T.V. because spends more time outside. Lady then says to see on T.V. to which he agrees and goes out. As Jake finds T.V., he sees that his son is in his own imagination, rolling in the puddle. As Jake wakes him up, T.V. starts to call him as his mom, to which Jake says that he is close enough. T.V. says to Jake that he needs to "get out of his room."

Jake notices the diary in T.V.'s hand and snatches it away from him and also starts to read it. He instantly grasps that T.V. is so obsessed with it that he has confused his reality with that of the diary's writer. As he notices the ripped pages, he gets interested in the mystery. T.V. points out the handwriting had changed right before the ripped off pages. Jake starts to say his theory of the pages and T.V. again goes off to his imagination, adding to Jake's theory.

Jake says that B.P must have got emotionally distraught and stressed, that she got infected by some disease and had to be taken to the hospital. After that, he says that she must have survived, except her hand was replaced by a crab hand by the disease, which would have affected the handwriting. T.V. continues the story saying that he refused to meet all visitors, which Jake gets confused saying that 'he' didn't meet the visitors. T.V. continues that he refused to see especially Justin. Justin sent him flowers, but one day they stopped. On the birthday, he decided he was going to keep his promise and goes to Love Tree Point. To his surprise, he finds Justin making out with Taffy and Mochi.

When T.V. said Love Tree Point, Jake mentions that that's where the people went for making out in the past. They go to Love Tree Point, which was very old and withering away. Jake points out the tree's heart shape, saying that's how this place got its name. T.V. mentions that Justin had a present around this place, and says it must be in that tree. They find the present in the tree, which is a music box. They both get emotionally stressed and start to cry, upset that B.P. never got Justin's gift, and that Justin must have thought B.P. didn't care for him. Lady Rainicorn flies up and sees them crying and embracing, and decides to let them handle this on their own.

The next day, Jake and T.V. make their way to the market to find out who had bought the music box. The owner of a music box booth recognizes it as her handiwork, but then says that it was a long time ago, and she must have made many boxes since then, so she doesn't remember its owner. As Jake makes his way out, she suddenly says that she remembers the owner of the box, describing the person as a handsome young man. She then says that it was for a girl named Betsy, who ran off to a cave because of the stress she had to endure, never to be seen again.

The owner tells them EXACTLY which cave Betsy resides, and they make their way to the cave with the box. Jake subtly tries to point out the similarity between Betsy hiding from the world and T.V. spending all this time indoors playing computer games, but T.V. is more interested in finding out what happened to Betsy.

In the cave, they find a house. The house contained many books and medical supplies, suggesting Betsy had educated herself in the medical field. Jake finds a letter named to Justin. They read it and Betsy says to Justin in it that being a teenager is difficult, and she needs to get away from the stress and drama of it all. While she recognizes that riding out her teenage years in a cave isn't a very sensible solution, she's learned a lot about medicine—she's even figured out a cure for her crab hand.

The note concludes by telling Justin that things would never have worked out between them, as he's way too clingy, and signs off the letter as Nurse Betsy Pound Cake.

Jake and T.V. then go to the Candy Kingdom Hospital and watch Nurse Pound Cake in action, as she confidently takes charge of a rough situation in the emergency room. They watch how she's now grown up, very different from the uncertain teenage girl who wrote the diary. T.V. wonders about the one loose end, the ripped-out pages from the diary. Jake says he found them in the cave—just a bunch of mean things about Justin. He remarks that Justin must be very sad about Betsy, and wonders if they should find him next. Having found the answers he was looking for, T.V. says "No" and walks off with his dad. 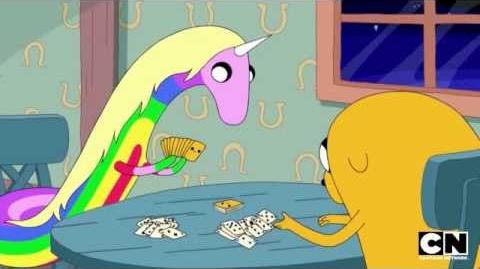 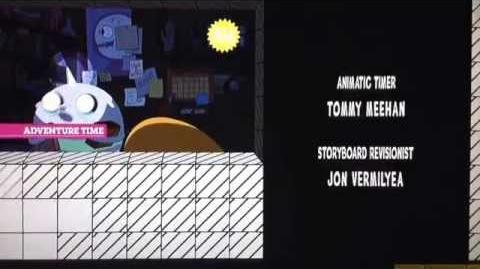 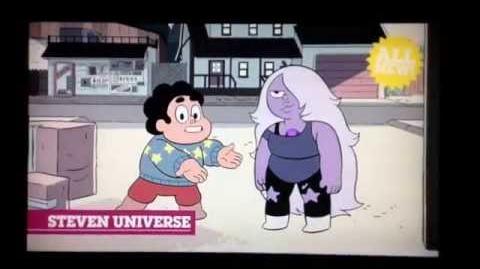 Storyboard panel
Add a photo to this gallery

Tree next to a lake

Under the chocolate bridge

Side of Lady's barn

Love Tree Point in the past

Flowers next to bed

Nuts in the love tree

Retrieved from "https://adventuretime.fandom.com/wiki/The_Diary?oldid=817090"
Community content is available under CC-BY-SA unless otherwise noted.