"The Dark Cloud" is the eighth and final part of the Adventure Time miniseries Stakes and the thirteenth episode in the seventh season of Adventure Time. It is the two hundred and twelfth episode overall.

The aftermath of the explosion of the vampiric essence at the end of "Checkmate" is shown. Finn is busy skirting through the remains of Gumbald's Cabin picking up pieces of Peppermint Butler. Bonnibel tells him that they have a bigger problem to worry about: the Vampire King's escaped essence has formed into a giant, living lion-shaped storm cloud, and it has begun to terrorize and suck up the Fat Villagers. Bonnibel hops onto her mechanical flying couch and tells Finn, Jake, and Marceline that it is up to the four of them to stop the cloud. Marceline, however, decides to stay behind; upset, she tells them that fighting vampires in the first place brought nothing but bad things and left her "screwed up," trying to fix her vampirism only made things worse and that trying to fight the cloud will only be another lost cause. Bonnibel tries to reassure her, reminding her of how they have always pulled through as the underdogs, but Marceline flatly refuses.

Meanwhile, Cloud Dance has joined his fellow villagers together to lead them in their last stand against the cloud. Bonnibel shows up and flies her couch up to the cloud, slicing it with an ax and rescuing trapped villagers. Finn and Jake try to get Marceline to join them, but she refuses and they proceed without her. Watching the chaos from the ruined cabin, a defeated Marceline congratulates the Vampire King on finally winning, saying that she only wishes that he had gotten it over with a thousand years ago. She begins to sing the opening lines to "Was it Reality," and the Ice King, who had been observing the fight, shows up, happy that Marceline has remembered his song. Marceline is surprised to see him and they sit together as she explains her predicament. The Ice King reassures her that she is making a good choice by sitting out the fight, explaining how they are both "survivors, like cockroaches or rats," and that avoiding the risk of losing or dying makes hiding worth it. Being called a cockroach actually ends up giving Marceline the motivation to join the fight, which leads the Ice King to claim that that was his intent all along.

In the Candy Kingdom, the Banana Guards are stationed at the kingdom's gates. The King of Ooo ignores the commotion outside and relaxes by a fireplace, despite Crunchy's insistence that he do his duty as leader and protect the city. The King of Ooo tells the Banana Guards to close the gates, but they see Bonnibel fighting the cloud and are inspired to defy his orders. Crunchy frees himself from being tied up and pushes the King of Ooo into the fireplace, reducing him to a melted pile of wax. Christening himself as "Princess Crunchy," he gathers the citizens of Ooo and motivates them to take up arms and join the fight.

The fight against the cloud rages on, with Bonnibel, Finn, and Jake receiving additional assistance from the Fat Villagers, the Candy People, the Fire Kingdom, and Hot Dog Princess's kingdom. To everyone's surprise, Marceline suddenly shows up and flies to the center of the cloud. Using her demon powers, she begins to absorb the cloud into herself, a process which leaves two bite marks on her neck and renders her a vampire once again. After fully absorbing it, she faints. Finn and Jake shield her from the sunlight and the last thing she hears is Bonnibel calling her name.

Marceline wakes up in her house, where Finn, Jake, and Bonnibel have just finished stocking her fridge with red objects to eat and supplying her with crosswords, Sudoku puzzles and Connect-The-Dots to pass the time. Bonnibel says that after she usurps Crunchy and becomes princess again Marceline is welcome to stay in her castle if she feels lonely, but Marceline says that she needs time alone to ruminate on being a vampire again. Finn asks Marceline how she feels, unsure whether to feel sorry or happy for her, but Marceline replies that she is fine with being a vampire again and that the experience of being mortal again, though brief, was worth it for the new sense of maturity and empathy she gained from it. After Finn, Jake, and Bonnibel leave, Marceline takes out her ax bass and sings a rendition of her mother's old childhood lullaby, "Everything Stays," over a closing montage of scenes showing that things have returned to normal. 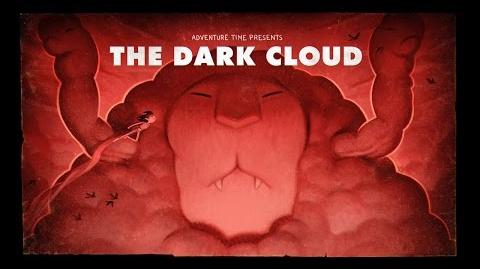 The Dark Cloud storyboard panel
Add a photo to this gallery

Retrieved from "https://adventuretime.fandom.com/wiki/The_Dark_Cloud?oldid=815175"
Community content is available under CC-BY-SA unless otherwise noted.