"The Creeps" is the twelfth episode in the third season of Adventure Time. It is the sixty-fourth episode overall.

Finn, Jake, and some friends attend a masquerade dinner with a mysterious host. However, the host then reveals himself as a murderous ghost that will possess the body of one guest to kill everyone else. The night quickly turns into a who-dun-it as the guests start to meet their gruesomely gory demises.

Finn and Jake headed to a castle for a party they were invited to by an unknown host. Outside the door is a box of disguises for them to wear. When they head inside they find Princess Bubblegum, Lumpy Space Princess, Cinnamon Bun, and BMO inside. They discover a note on Cinnamon Bun's back. Finn reads it telling them that their host is a ghost that will take over one of their bodies and kill the rest of them. Cinnamon Bun tries to leave, but as he tries to open the door, the lights flicker. When they come back on, there is nothing left of him but a skeleton.

Jake thinks Finn planned this from his birthday prank but Finn denies it. Finn brings the remaining party guests to the staircase and has BMO take pictures of them with its ghost detecting gear to see who is possessed. Jake doesn't blink when his pictured is taken, making everyone believe he is the ghost until BMO confesses it has no ghost detection gear and just likes taking pictures.

Jake suggest they get candles in case the lights go out again, which they do. He and BMO head into the basement where BMO disappears, having been captured by what appears to be a long worm-like white ghost. Jake then runs upstairs and tells Finn and Princess Bubblegum that the ghost has captured BMO but Finn accuses him of being the ghost. Everybody panicked when they heard Lumpy Space Princess screaming from the bathroom.(Which turns out she was using it).

They go to the dining room where they begin to point fingers at each other. Finn asked Jake a question that only the real Jake knows. After Jake correctly answers the question, Jake accuses Lumpy Space Princess and that she has to tell them why she broke up with Brad to prove herself. She refuses on the grounds that they didn't know what happened between them. Finn wanted to tie her up with Princess Bubblegum agreeing with him, causing her to be accused of being possessed (Lumpy Space Princess then continually interrupts; confessing that she broke up with Brad because he kissed her on the mouth and she wasn't ready).

Finn then asks Princess Bubblegum to recite what he wrote her two years ago as a birthday card, but she refuses because she could not remember. Then the long worm-like white "ghost" passes through the roof and through Princess Bubblegum, causing her to melt. It also engulfs Lumpy Space Princess and she tries to call her parents but then the lights start to flicker and the ghost captures her and puts her in a painting. Finn then admits that this was a prank, but that wasn't part of it. Finn checks the closet where CB and BMO are supposed to be hiding, but instead finds their splattered and scattered remains. Finn and Jake tries to escape but the doors were locked. Then they try running upstairs but Jake was captured. Finn then hides in a room. Out of bookshelves, the Ghost Lady appears and tries to get Finn but he managed to escape by breaking a hole in the wall. In the next room, the floor bursts open, a picture of crows on the wall comes alive and releases crows into the room. The floor seperates completely into a mouth shape, and the furniture begins to try and eat him, and Finn flees this room and up a nearby stairwell into the observatory.

The observatory is surrounded by ocean, which crashes up against the base of the building in huge waves. The light rises through the floor, finally cornering Finn, when the light takes the sheet off its head and herself to be Lady Rainicorn with all the guests in her body, and Jake on her back. Jake reveals that he knew about Finn's plan for months and set this up with Lady Rainicorn. Finn asks about the monster he saw and the house coming alive.Jake believes he was just imagining it out of fear but Finn denies it. Jake then thinks its just another joke. After they leave on LR, Finn flashes back to the monster he saw and decides to put it in "the vault" and forgets about it. 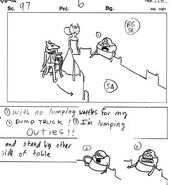 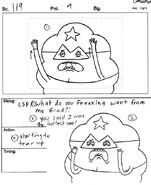 Title Sketch
Add a photo to this gallery

Jake (aka Randy) in the basement.

The trick is revealed!

LSP trapped in the painting. 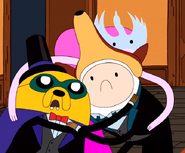 The snail makes yet another hidden appearance.

Jake (aka Randy) screaming.
Add a photo to this gallery

Video:The Creeps Animatic
Animatic
Add a photo to this gallery

Retrieved from "https://adventuretime.fandom.com/wiki/The_Creeps?oldid=359294"
Community content is available under CC-BY-SA unless otherwise noted.