Jesse Moynihan
Andy Ristaino
"The Comet" is the forty-third episode in the sixth season of Adventure Time. It is the one hundred ninety-ninth episode overall.

After Orgalorg reveals its true, gigantic form, Finn and Jake are jettisoned into space and separated.

After Princess Bubblegum notices the purple sky and the explosion from the Candy Kingdom, Peppermint Butler spots her spaceship emerging through the smoke. Finn and Jake cling on to the rocketing ship. They slip from the top but Finn's thorn on his hand catches hold of the ship. When inside, they find spacesuits, put them on and try to stop Gunter. Gunter is already outside of Earth’s gravity and the green brain peels away to reveal his true form, replacing the penguin with its true form as Orgalorg.

The fully-powered Orgalorg destroys the spaceship and takes on a larger form, similar to a jellyfish. It talks to Finn and Jake about opening doors that allowed him to do what he wanted. Jake empathizes with Orgalorg about his philosophy until Orgalorg reveals he wants to destroy planets. He snatches up and sends Finn and Jake careening through space, putting Jake on the path to the croak dream he had back in season 3’s “The New Frontier”. Finn is floating alone in the void of space, he dedicates all his power to merging his intentions with the universe through a meditative song. He sings about how things are falling into place and he’s exactly where he needs to be, and he achieves serenity by fully believing these words. The universe responds to this belief by making it true, and Finn ends up being exactly where he needs to be: right in the flight path of Martin’s giant glowing moth.

Finn asks to be helped but Martin insists that the Moth does what it wants and can't be controlled to help Finn. Martin pulls out a pair of underwear and assures Finn that he'll be fine since he's wearing gloves. Finn gets into the moth's mouth with Martin hoping to stop Orgalorg with his dad and the moth, but his dad explains that he can't control the moth as it goes where it wants and begins to panic as he hears Orgalorg's name. He claims that he isn't dumb and know who Orgalorg is, hinting at Orgalorg's existence to be common knowledge for some. Suddenly, the moth starts to fly toward Orgalorg. The Catalyst Comet gets consumed completely by Orgalorg. Finn jumps out of the moth's mouth and dives into Orgalorg's mouth.

Inside he hopes to free the comet, which is being drained of energy by tentacle-like branches from inside the monster's mouth. The branches also attack Finn, penetrating through Finn's arm, causing his grass hand to evolve, which bursts out of his spacesuit into a whiplike vine appendage. Using this vine arm, Finn cuts the comet free, and slashes several slits through Orgalorg, causing an ejaculation of cosmic power that contains the promise of new life if Finn accepts it. The seed of this change is the purple three-eyed sphere that is the comet’s core, and it offers enlightenment to Finn, showing him his past life as one of the incarnations of the comet. The comet became a butterfly and many other things including the Lich, as was previously revealed in "The Vault." All of this leads to Finn in space at this exact moment, choosing if he wants to go with the Purple Comet to “the end and beginning” or if he wants to stay a human back on earth.

“This is your crisis,” says the Purple Comet as a rainbow radiates from Finn’s head, projecting images to accompany all the words in the forthcoming list. “As you stand on the edge of freedom from love, hate, friendship, isolation, jealousy, secrets, violence, video games, ice cream waffles, sadness, madness, power, honor, loyalty, saucy, mothers, fathers, scoundrels.” Finn cuts the comet off and asks how long it's going to keep listing things, but the comet replies that it's a very long list. That's because a life is made up of a million and more different things: relationships, emotions, possessions, experiences and many others.

Finn points out that is not making that option sound bad, and the comet answers that it's not supposed to be; the comet continues by saying that it is just giving Finn the choice of a new existence. Finn says that he's put a lot effort in his "meat existence" and would like to see it through to which the comet is content with Finn's choice. Martin, on the other hand, is excited for the future, and would love the chance to enter a new mode of existence. Finn is initially disappointed that his father is going to run off again, but he finds comfort by realizing that Martin was never going to change and that this ultimate act of abandonment is what his father's life has been leading to and Martin is "glad" that they "finally understand each other." And then Martin asks the comet to "start the engine" and Martin and the Moth are gone, transported by the Purple Comet to a new state of being while Martin biding his son farewell.

Finn finds Jake's suit but gets terrified when he doesn't find him in it. Jake suddenly appears with Banana Man in his rocket from the back. They ride it back to Ooo. Orgalorg's remaining form grasps on to the rocket ship with his tongue as it speeds into the earth's orbit. Orgalorg gets compressed by earth's gravity and gets crushed back into Gunter. The rocket crashes into Lake Butterscotch where Princess Bubblegum and Peppermint Butler observe from the side next to their cabin. Finn, Jake, Banana Man and Gunter emerge from the ship unharmed and satisfied. Peppermint Butler is holding a fish that was flown out of the lake as the rocket crashed. The fish claims that it'll croak now. 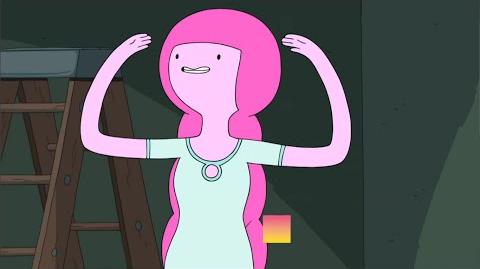 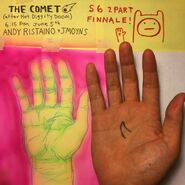 Debris in space with the Earth, sun and an unknown planet

Lake Butterscotch next to Gumbald's Cabin 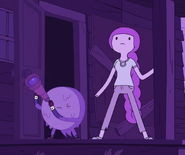 Finn and Jake cling onto the spaceship 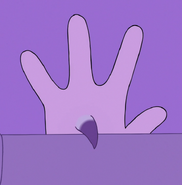 Gunter evolving into his true form

Finn and Jake lose each other in space

Orgalorg chases after the comet

Martin appears with his Space Moth 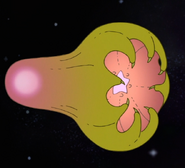 Orgalorg tries to absorb its power 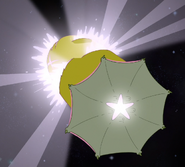 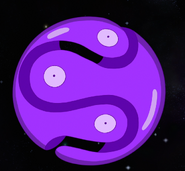 The rocketship from the croak dream

Gunter evolved back due to compression 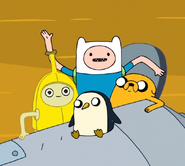 They emerge safe and sound
Add a photo to this gallery

2. http://jessemoynihan.com/?p=2452&cpage=1
Retrieved from "https://adventuretime.fandom.com/wiki/The_Comet?oldid=785087"
Community content is available under CC-BY-SA unless otherwise noted.