Owner of the soul stone (former)

Jeff Bennett
The Beast is a gigantic monster introduced in "The Suitor." He owned the soul stone until he let Braco take it after he told him that he did it for the one he loves. The Beast appears to be a bigger monster feared by the other monsters of the Vapor Swamps.

He also appeared in Time Tangle mobile game as a boss.

He is a giant beast with tons of black fur. He has two green horns and sharp teeth, though not that many. He has a tail that splits into two. He also has glowing yellow eyes and appears to have no nose. 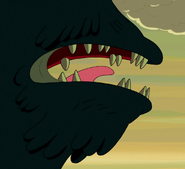