Thanks for the Crabapples, Giuseppe!

Thanks for the Crabapples, Giuseppe!

Somvilay Xayaphone
Seo Kim
"Thanks for the Crabapples, Giuseppe!" is the thirteenth episode in the sixth season of Adventure Time. It's the one hundred and sixty-ninth episode overall.

Ice King and a band of misfit wizards take a road trip to make their own secret society.

The episode opens at the Ice Kingdom. The Ice King boards a bus with Abracadaniel, Little Dude, Ancient Sleeping Magi of Life Giving, Beau, Leaf Man, Ron James, and an old guy they randomly picked up who Ice King decides to call Giuseppe for a road trip. Ron James explains how they'll travel to Big Butt Rock and go on the Cheek's Peak, where the various feelings and insights they gain from the journey will allow them to create a completely original spell, allowing them to form a new school of magic, like a less jerky secret society.

The wizards head by the Tree Fort, where Abracadaniel and Ron James (with help from a twinkling-eye potion) get some Water Nymphs to join them as the final members of the journey (Ice King guessed Finn and Jake are out of the wizards' league, though the two rush out to join the trip just as the bus leaves).

Their bus runs out of gas in a cow pasture, at which point the wheels also fall off. Ron James figures this is a sign from destiny that they should be inspired by the muddy pasture, so they use the downtime to write unique combinations of words to try to make a new spell. When the gun-toting farmer who owns the land demands they get out, Ice King uses his powers to create an ice road for them to continue onward. Eventually, he runs low on "juice," and trades headgear with Abracadaniel, who continues creating the ice road from the bus' roof.

As the bus heads on, Ice King sees a crabapple tree and has Giuseppe get out to get some crabapples. However, the bus can't stop moving, and Giuseppe is too slow to catch up with the bus. While he is able to toss the crabapples to Ice King, he is left behind.

In tribute to Giuseppe, Ice King reads Giuseppe's "spell," a heartfelt poem about fathers and daughters, which reduces the wizards to tears. Ice King proclaims it as art. He reads several other "spells" by the wizards, and then calls for a cauldron to combine them into one spell for their arrival to Big Butt Rock. He says an incantation over them, which creates a yellow gas that knocks out everyone, including the returning Abracadaniel, right as the bus enters a swamp.

Everyone wakes up later to discover the bus half-sunk in the swamp and filled with water. The nymphs flee, the Ancient Sleeping Magi of Life Giving tries bringing the bus to life (it still can't swim, so he turns it inanimate again) and Ron James tries a vial he got from the Mystery Mountain as a last resort. He drinks some, causing his head to be replaced with Tree Trunks, who was being massaged by Mr. Pig, so that he is massaging Ron James' head instead. Ice King tries the potion himself, but only swaps heads with the Ancient Sleeping Magi of Life Giving.

Abracadaniel suggests that perhaps, like the rest of the trip, this is destiny guiding them, and they should just accept the situation. With this, Giuseppe appears by the lake, using magic powers to lift the bus out of the lake. Ice King asks Giuseppe how he did this, and Giuseppe winks and gives the wizards a thumbs-up before he turns into blue sparkles that go onto the trees surrounding the lake. Abracadaniel wonders who Giuseppe was, and Ice King replies that he doesn't know, but that Giuseppe showed all the wizards something new. From overhead, it's seen that the sparkles on the trees have formed the shape of Giuseppe's head, which winks.

The scene then changes to Wizard City, where a couple of obnoxious wizards exchange a "secret wizard handshake" and openly brag about their "secret thing tonight" in front of Abracadaniel, whom one calls a "loser." As Abracadaniel walks on, he encounters the Ancient Sleeping Magi of Life Giving. They wink at each other and show their rings which have a picture of the crabapple tree on them, a symbol of the society the wizards on the trip have formed based on their unique shared experience. The image on the ring dissolves the crabapple tree that they last saw Giuseppe at and Ice King's voice is heard saying, "Giuseppe." 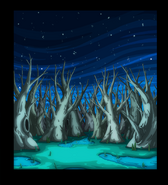