Stephen Root
The Tart Toter is a Candy Person who used to work for Princess Bubblegum, delivering the royal tarts to the Back-Rubbing Ceremony at the Royal Congressional Hall. His role as the official tart toter came to an end because he went "mad - and old." It is unclear if other toters have delivered tarts since his mental deterioration. In "The Other Tarts," Cinnamon Bun offers to take his place, but Princess Bubblegum allows Finn and Jake to tote the tarts saying that Cinnamon Bun is "half-baked." Despite no longer being the official tart toter, the Royal Tart Toter arrives at the Back-Rubbing Ceremony without warning. His appearance seems to frighten the Candy People, who hide their presence from him by freezing in place (as he can only sense movement). He then gave an eloquent, if non sequitur, soliloquy to end the episode.

He makes a brief appearance as one of the guests in "Holly Jolly Secrets Part II." He also appears (wearing an Elizabethan collar) in "Princess Cookie" he appears as a patient of the Candy Kingdom Mental Hospital.

The Royal Tart Toter is a large gingerbread man whose appearance has suffered physically as a result of his insanity. He has been bitten on the right shoulder, hip, and right leg; several of his teeth are missing, and his elaborate frosting, once ornate, has smeared in many places or vanished altogether. Several of the medals with which he was decorated earlier in his career have been lost or damaged. In his left hand he carries a chicken, and in his right hand, a squirrel. When the Royal Tart Toter speaks, icing pours out of his mouth uncontrollably, analogous to the frothing maw of a rabid animal. He is also missing his right boot. For hair, he has a pad of melted butter, and wears a shriveled Maraschino cherry for a hat. 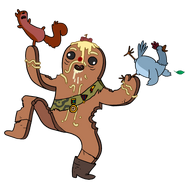 He and his "royal tarts." 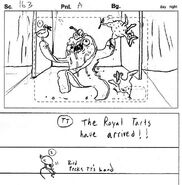 The Royal Tart Toter says The royal tarts have arrived!!

The Tart Toter, featured in "The Other Tarts" title card

When the Tart Toter was not old and crazy, as described in Princess Bubblegum's story

During his speech, the Tart Toter somehow appears in his Galaxy of Flavors.