Gregg Turkington
The Talking Bush is seen in the episode "Another Way" by the Acid River. He calls Finn a "dummy" and tries to discourage him from crossing the river, saying it is impossible. Electric eels burn off all his leaves after Finn swings him in front of himself in order to cross the Acid River, but they later grow back once Finn douses him with Cyclops tears.

The Talking Bush is shaped like a two-part snowman. His face is on the lower portion of his body.

The Talking Bush is quite rude to anyone and insults whoever is insight.For examble, He called Finn a "Strange dummy," "Doofus," "Ugly tramp," "Ugly, fat-smelling fathead," and more. He is very afraid of the Acid River in spite of, or possibly due to, his close proximity to it. He seems rather grateful after Finn heals him with the Cyclops Tears. 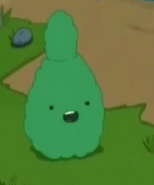 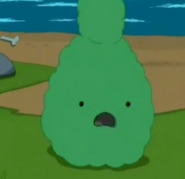 "Plus it's jammin' with electric eels!"
Español
Community content is available under CC-BY-SA unless otherwise noted.
Advertisement