If you remember the episode of where Finn and Jake meet Marceline for the first time I Think one of the marceline related episodes have Worm king at the end of the episode saying hello friend give me hugs then possesed their mind for hugs!

Please remember to sign your posts with four tildes (~~~~). . ƒelinoel_

It appears as if Lady Rainicorn is in this episode. In the long preview video, you can see Finn touching something that looks like the mouth of Lady, with a rainbow pattern on it, and then it turns into some weird thing. Does anyone else agree81.166.47.203 13:44, August 7, 2012 (UTC)

Speculation. This type of discussion belongs in the forums. Please keep talk page posts to about only improving the article itself. . ƒelinoel_

Is it really necessarry for it to say that this is Flame Princess' 3rd appearance in season 4 and 4th appearance overall? I don't really find it important enough to be put in the trivia, but if it is, can someone give me a good reason?

Flame Princess is AWESOME. Next question? Also, I find it interesting that Finn is dreaming about being married to FP AND Princess Bubblegum. It makes me wonder if Finn has some subconscious leftover feelings for PB, even though he seemed not to in "Burning Low."71.246.91.23 22:13, August 7, 2012 (UTC)

Her appearance count is more important than the episodes in which Jake farts, which btw is also counted. . ƒelinoel_

This isn't really the place to discuss this... . ƒelinoel_

i think she should be a main charecter i mean after all they are going out but what confuses me is princess bubblegum said that finn and her were married and flame princess was still going out with him174.130.67.184 15:35, August 8, 2012 (UTC)

Please take a look at what the admin above said, then go take a look at the rules here listed as the Code of Conduct, specifically the very last rule before it talks about Privacy. . ƒelinoel_

Do you guys think every episode after Evicted are all Finn's dreams? Tell me no if yes then I'll flip out!Adventuretimefanatic555 (talk) 07:11, August 9, 2012 (UTC)

This type of discussion belongs in the forums. Please keep talk page posts to about only improving the article itself. . ƒelinoel_

I just found A piece of official promo art by Adam Muto but im no good at adding pictures so could someone please add it to the official art section. Thanks ExDeuce (talk) 23:59, August 9, 2012 (UTC)

the lich is back

look in the promo art. the lich is hugging PB.

Pretty sure that is just a dream version of him... maybe. . ƒelinoel_

On the opposite side of the worm to the Lich there appears to be some sort of zombie cinnamon bun so he could be put into the character list. Both the Lich and Cinnamon bun may only be there because they are appeared in some of the more traumatizing and terrifing events of the series and represent the nightmare aspect of the episode. ExDeuce (talk) 15:13, August 10, 2012 (UTC)

Either way it looks like a zombie candy person. It would make sense because Finn may have become afraid of zombies after the two outbreaks and he is also likely afraid of the Lich as well as his phobia of the sea which is represented by the water and fish at the bottom. ExDeuce (talk) 15:58, August 10, 2012 (UTC)

I disagree that this picture proves they are in the episode... >.> . ƒelinoel_

You may disagree all the way you want, but that would be logical.

ExDeuce, I thought it was some kind of Monster of Loch Ness or a dinosaur at the beginning lol. But I think you may be right. Kasumisty (talk) 16:09, August 10, 2012 (UTC)Kasumisty

I was more implying that they link in with Finns fears and i thought there was a possibility that they could appear as manifestations of that fear in the form of nightmares. Considering that Finn is dreaming and that the ghost from The Creeps appears I thought that that they may appear in similar situations in his dream. I never directly implied that they will definately be in the episode. ExDeuce (talk) 21:10, August 10, 2012 (UTC)

Hey isn't the lich still possessing the snail so how can he be back in, the snail is in every episode waving for a second right? so your saying the lich can be back in his own body.

That is a dream Lich, not the Lich. . ƒelinoel_

...why does it matter for you in what circumstances the Lich will appear? We list characters who appeared in the episode. Kasumisty (talk) 18:53, August 13, 2012 (UTC)Kasumisty

What was the reasoning for adding that "Evicted" trivia? From what I have been hearing is that there are several facts against it. Whoever agees with me should speek up. Thank you for not being upset admins.

It was removed earlier, but here's a question: Since there's a formspring response from Muto stating precisely that the Evicted theory is wrong, should it be mentioned as a misconception with the response as a reference? Lailoken (Talk) 08:23, August 14, 2012 (UTC)

I don't have the link, but basically someone asked if the Evicted theory was correct and he said something like "No. That would be a waste of time." Though, since writing my previous comment I found out that this wiki is not supposed to have any Formspring references at all since the answers on there can't be considered canon. Lailoken (Talk) 05:16, August 22, 2012 (UTC)

I don't know but, this can be not the ending of evicted because of this reason:

People speculating over whether this was a continuation of Evicted, or a prophecy dream, when he explains to Jake about FP giving him soup, he A) knows her name, and B) says it casually like he knows her, not calling her "some fiery chick", ie. My input :P Also, think if it's a continuation of Evicted, what if every episode until the end of this one was in the King Worm's eternal dream o.O That sent a shiver down my spine.

Is this episode funny to you?

I thought it was hilarious! What about you?

The link to the Clown Nurse page may have been misleading, but the bullet point is valid. Clowns are one of Finn's fears, and this was mentioned in "Another Way." It should be added back. Lailoken (Talk) 02:22, August 17, 2012 (UTC)

Okay, if you add, do not say it is one of the clowns from "Another Way," and make sure it is about clowns in general. --

When Finn falls from the highchair being chased by Shoko, what's the thing that falls behind him? I'm not sure what its supposed to look like, but I think I saw a paw or something. It may be a reference to Shoko's tiger. Fanartist (talk) 03:12, November 23, 2013 (UTC) 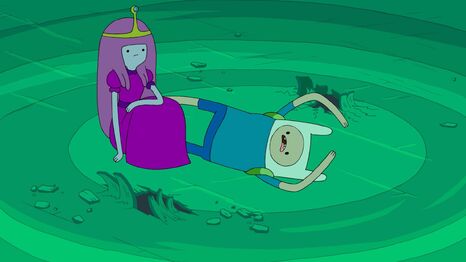 Another fast forward error-finding instance I did with the AT Blu-rays. This still I caught from the Season 4 BD has an error that you might be able to make out. Should this color error with PB's dress be documented? Finn & Jake (talk) 18:16, December 14, 2016 (UTC)

Retrieved from "https://adventuretime.fandom.com/wiki/Talk:King_Worm_(episode)?oldid=752266"
Community content is available under CC-BY-SA unless otherwise noted.