Princess Bubblegum searches for a cure for Marceline and Finn and Jake battle a vampire.

The episode starts with Simon and Betty lovingly stirring something over a stove, then pulling a pie out of the oven, while an echoing song sung by Marceline is heard in the background. The pie (which has a face) smiles up at Simon and Betty as a Marceline knocks at the door, looking fancy and holding flowers. Simon and Betty step out holding the pie, and all three begin burping as the song ends. Marceline then recalls she was hunting a vampire, The Moon.

The burping continues as the scene (revealed to be Marceline's dream) ends and transitions into Bonnibel holding Marceline as Finn and Jake stand over her, burping. Bonnibel tells Finn and Jake to stop, but they reply this was a "cure all" their parents used on them. Bonnibel replied that there are no cure-alls, then asked them if they knew what Hubris was. When they said no, she defined Hubris as excessive pride or arrogance. Lumpy Space Princess chimed in that this sounded like Bonnibel. Finn scolded LSP, but Bonnibel agreed. She sadly explained that her Hubris was to blame for Marceline's dying state. Jake disagrees with her and says that Marceline sacrifices herself for a reason, and friends always stick together. When Finn agrees, he stated that he gets poisoned all the time – food poisoning. Peppermint Butler said that he always gets poisoned for research, and has a poison lab back at the castle. Bonny immediately orders all of them to go there. She orders Finn and Jake to find The Moon, and take her back to the castle. When she says "you guys take her back," it sounds like "you guys stake her back." Then, they split up, leaving LSP. A stake comes out of LSP's body. She shivers and then laughs.

Cut to the forest. Finn finds a moon pearl. Jake says it's gross, but Finn thinks they're pretty. They follow the trail of moon pearls. It leads to The Moon's hiding spot, in a boat. Jake again says it's gross. They find The Moon hiding in a crock. Finn and Jake put a stake on her body. They wait, while Jake thinks about The Moon exploding or something, and then the stake sword comes right out of the Moon's body, and Finn mentions it. Then, the two try frying the vampire in the sun. It works, but The Moon heals her face nearly as fast as it burns. While Jake thinks of a way to kill her, Finn tries staking her in a bunch of different ways, like what Bonnibel said.

Next, cut to the Candy Castle. The King of Ooo is seen ordering his Banana Guards to place the tied Crunchy on the wall properly. Then, Bonnibel kicks the door open and scolds K.O.O. But when he reminds her that she lost the election, Bonnibel says loudly, "Monarchies are not democracies!" She kicks the King, and then P. Butler steals a set of keys from the King's pocket. When he orders the Banana Guards to seize Bonnibel but the Banana Guards, confused, asks Bonnibel if it's okay to listen to K.O.O. She tells them to keep him out of her way and to untie Crunchy.

Cut back to Finn and Jake. They've been staking the Moon for hours, and Jake mentions that. Finn says that it's weird that Bonnie wanted them to stake her back, rather than taking her back. When the two think about it, they're still confused between "you guys stake her back" and "you guys take her back." Finn suggests that they do both. Jake says that they should put her back in the crock, as the sun goes down. When her bat ear on her forehead wiggles, Jake panics and puts The Moon back in her crock to sleep, but she hisses and Finn dares her to chase them. Finn rides on Jake's back and The Moon chases them.

The Moon keeps chasing Finn and Jake. When Jake asks why Finn made her chase them, Finn says that Marcy needs her healing powers. Finn sees the Moon running with many feet. He mentions that she's smiling right at him. Finn asks Jake to stop, but after he hits his butt, he slows down. Finn starts saying some tough words to The Moon, then she starts to speak in a deep voice, "you run in the path of my light" and "how can you lead me when I am your guide" and then, Finn notices that she's talking about the real moon in the sky. Then, The Moon starts laughing with a horrific expression which causes Finn to get scared and make Jake run faster.

Cut back to the Candy Castle, in the Poison lab. Bonnibel is panicking and wanting to know where the science equipment in the lab is. P. Butler says that there are no tubes needed, only magic methods. Then, Bonnie calms down. A Banana Guard starts crying. She thinks it is worried about Marcie, but it says that they really miss her. Then they all hug her, to her surprise.

Then P. Butler does something and says that to process requires two more hours. To pass the time, P. Butler says they do something, like play video games. Bonnie says she doesn't like video games. One of the Guards says he has a video game, a yoga video. The Guards debate about whether a video tape counts as a game or not. Then Jake busts through the wall, with Finn and The Moon close behind. Bonnie hides with Marcie in a hatch and locks it, telling Finn and Jake to hold her off until Marcie wakes up. Finn tries to stab her but suddenly collapses. She hisses at Jake and he also collapses. Finn tries to stop her by grabbing her ankle, but just gets pulled along. Finn asks the Banana Guards to help, but she melts the chocolate covering their tops. The Moon tries the lock, while Finn goes back for his sword. Bonnie slaps Marcie lightly and tells her to wake up.

Marcie is having a dream, where P. Butler is digging a grave by a tombstone at the cabin. Marcie is old and singing a sad song on her axe. Bonnie is noticeably taller. She sings in a voice reminiscent of BMO's. Marcie yells in a scratchy, old voice that she can't hear. Bonnie says tor Marceline to wake up. Suddenly it is raining inside and a hand pops out of Bonnie's mouth. Then the cabin shakes and orange ooze starts dripping down the walls. The Moon's voice is heard and hands pull down the soggy walls, revealing the full moon. Marceline wakes up to The Moon opening the hatch. Suddenly, P. Butler shoves a giant stake in The Moon from behind and shoves it forward. Marcie sucks The Moon inside her and heals quickly falling asleep peacefully in Bonnie's arms. Finn is still sruggling to take action to the Moon until Jake reminds him that its already been taken care of and Finn thanks Glob that The Moon is dead.

The Moon is crossed off. 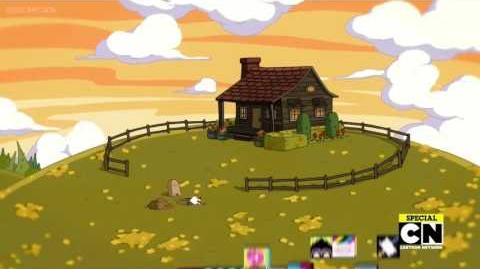 Almost looks like the face Jake made in "Tree Trunks."