"All the Little People"(as a toy)

Steve Little
The Swamp Giant is a monster who appears in the episodes "Business Time" and "His Hero." In "Business Time," he is seen on a monitor chasing Lumpy Space Princess, who apparently angered him by calling him "ugly." In "His Hero," Finn and Jake stop him from capturing the Mini Queen. He returns later in the episode, threatening to grind up an old lady, but Finn once again stops him by punching him twice and apparently knocking him out.

The Swamp Giant has what appear to be mud-covered legs, similar to a deer's hind legs, though without hooves. His hulking, semi-obese body is apparently completely hairless, other than the stubbly hairs that are seen on his round belly and what appears to be facial fair. He also appears to have bulky shoulders that are a different color than the rest of his body. On his shoulders, there may be skin discoloration and tumors, although these may be explained as mold and fungi. He has a single left arm that is spiked, and is sometimes holding a whip. His right arm is separated into three smaller, apparently jointless limbs. The hair on his head is the same color as the mud on his legs, and is held together by two hair ties, one on each side of his face. His face is the same color as his arms and shoulders. He has a short, brown, fluffy tail. He wears the skull of an unknown animal as a hat.

The Swamp Giant has been known to kidnap, antagonize, harass, and threaten at least one queen, one princess, and one old lady. The reason for his kidnapping of the Mini Queen is unknown, and he refuses to disclose her location to Finn even when her discovery would have been imminent (as he was falling from a great height, and would be unable to stop Finn and Jake from finding her on their own).

He threatens to "grind up" an old lady, and then pokes her in the head several times. When confronted by Jake, he mockingly says that "It's not evil, when they get this old they wanna [sic] be ground up!" He turns back to the old lady and says "Right, ya old bat?" then continues to poke her harshly in the stomach until Finn punches him. 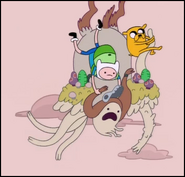 Lumpy Space Princess being chased by the Swamp Giant.
Español
Community content is available under CC-BY-SA unless otherwise noted.
Advertisement