"Susan Strong" is the eighteenth episode of season two of Adventure Time.

Finn is excited to discover a tribe of "humans" living underground, but gets more than he expected when he tries to teach one of them about the surface world.

Finn and Jake are being asked to do a favor for Princess Bubblegum by ripping out taffy-tree stumps. Before they start taking the stumps out Princess Bubblegum inadvertently brings up some complex emotions in Finn by reminding him that he is the only known human. Though this fact doesn't outwardly bother Finn, he claims that when he thinks about it too much, he gets "all soul-searchy and weird." To take his mind off of this thought, Finn and Jake start work uprooting. Very soon after they begin to work they find a strange metallic hatch among the old tree stumps. They hop down to find an underground cave full of garbage. Living in the garbage are a tribe of "Hyoomens" who wear animal-themed hats on their heads (similar to Finn's) and are scared of their own shadows.

Finn corners an unusually strong woman with a cat hat. He is stunned and excited to see what he thinks is another human. He attempts to encourage her to come to the surface and see the sun. When asked her name, she says "su-sun" trying to repeat what Finn had said earlier about the sun. Finn misinterprets her statement as Susan, or perhaps it is her actual name coincidentally. He brings her to the surface world to teach her about the wonders it holds. This is tough at first, as Susan is afraid of everything she encounters. After several occasions of Susan being afraid of harmless things such as rocks (which Jake refers to as "low-level enemies") and a Dancing Bug, Finn and Jake roast marshmallows with her, and Finn eats the blackened and burnt marshmallow off his stick.

As Jake plays guitar, Finn sings a song to Susan about life on the surface. Seeing that Susan really likes the marshmallows, Finn takes her to the Candy Kingdom. There she talks to Princess Bubblegum and has apparently learned basic English. Overwhelmed by the abundance of sweet, delicious candy, she attempts to eat Peppermint Butler until she is stopped by Finn who says "you can't eat the ones that talk!". After Finn scolds her for trying to eat the Candy People, she realizes that Peppermint Butler is a friend and believes that everything, besides Peppermint Butler, is edible and acceptable to eat.

She runs to inform the rest of the Hyoomen tribe to eat the entire Candy Kingdom except for Peppermint Butler. Finn hurriedly warns the Princess about Susan and the others. She tries to make the candy people scary but there is no masking their cuteness. Remembering that shadows look scary to the Hyoomens, Finn and Jake show them the spooky shadows of the Candy People. This works at first, but Susan, who knows better, and has learned enough that she can now teach her tribemates, explains to them that its perfectly safe and they continue the attack. However, the young Marshmallow Kids, who feel like they can take on the hyoomens, are accidentally set on fire and run after the Hyoomens, setting them on fire in the process.

They throw off their burning hats to reveal that they are actually mutated humans with gills and fins. Finn in a state of shock when he realizes that they are not true humans. Finn asks Susan, who was smart enough to avoid the fire, if she is really a human. Instead of answering she runs away looking confused and scared. Finn wonders aloud if she was a human or a wild animal, and Jake tells him "we're all wild animals, brother." Finn then eats some of the burned marshmallow skin and stares into the sunrise and replies, "Yeah... I guess we are, brother." 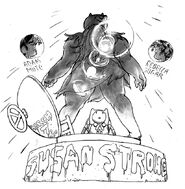 PB's outfit from this episode. 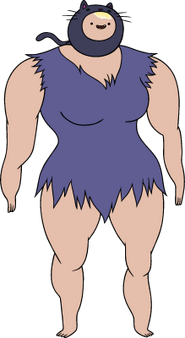 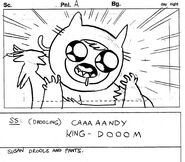 Candy Kingdom weaponry. Notice how most of the arsenal's weapons are candy. From Axes to Lances to Swords. However the armor maybe steel, the peppermint shields wood (or peppermint making it candy), and the unknown Popsicle weapon.

Adventure Time-Regular Show reference.jpg
The "reference" Phil Rynda said it was NOT a reference.

Finn, all soul-searchy and weird 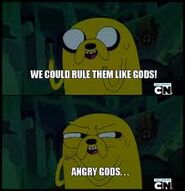