Graham Falk
"Summer Showers" is the sixteenth episode in the seventh season of Adventure Time. It is the two hundred and fifteenth episode overall.

Jake's daughter Viola is up for a role in a play by a hot new director—Lumpy Space Princess.

Viola meets Jake at a nearby restaurant, where, embarrassed, she lies that she got the part. Jake, who is proud of his actress daughter, mentions that he feels he might not have been that great a dad, but seeing Viola succeed makes his life worth it. He offers Viola more encouragement as Lumpy Space Princess texts Viola to get back to the theater, where she publicly berates her.

Viola's main task on the play involves a scene where Mr. Cupcake plays a character who comes in from the rain to talk to the lead character, "Miranda Hobson" (the role Viola auditioned for), played by Tree Trunks. For the scene, Viola must create a lightning sound effect, then cover Mr. Cupcake with water to make it look like he's come in out of the rain. However, Lumpy Space Princess yells that Viola's first effort has too much water, and her second effort, spraying Mr. Cupcake with misted water, has too little.

Lumpy Space Princess takes Viola up to the roof of the theater, where she orders Viola to fill up a notebook with drawings of raindrops, to get a sense of what they really look like. She expresses how important this play is to her, how she wants to receive the same kind of respect as a princess that someone like Princess Bubblegum gets (Viola asks Lumpy Space Princess if she has thought about talking to someone about her insecurities, to which Lumpy Space Princess retorts that she has Viola). She leaves Viola on the rooftop and heads back to the play, where Mr. Cupcake is having trouble calling Tree Trunks by her character's name. On the rooftop, Viola thoughtfully works at drawing raindrops, then when the door back downstairs is locked, uses her Rainicorn powers to teleport behind Lumpy Space Princess (who expresses surprise, as she locked the door on purpose).

Time passes as rehearsals for the play continue. Viola works at a number of tasks, including sweeping up and creating rain effects by using an eyedropper to create water drops on Mr. Cupcake's coat. Throughout this, she mouths along to all the characters' dialogue as the actors rehearse, having memorized the entire play.

On opening night, a number of Candy Kingdom citizens are lined up out the door, along with Finn, Jake, Lady Rainicorn, several of Viola's siblings and many of the tenants from Finn and Jake's Tree Fort in "Ocarina." Before the play can start, Tree Trunks tells Lumpy Space Princess that she has to drop out, as Mr. Pig got very jealous and upset over her having a kissing scene in the play. Lumpy Space Princess freaks out and wonders who has the play memorized and can step in for an eleventh-hour rescue. She seems to be talking to Viola... then promptly declares herself the lead. Sick of Lumpy Space Princess bossing her around, Viola teleports Lumpy Space Princess to the Ice King's lair and takes the lead.

A furious Lumpy Space Princess makes her way back to the Candy Kingdom, while on stage, Viola delivers a sincere, heartfelt performance. Jake, Lady Rainicorn and Jake Jr. all appear riveted, though Finn is struggling not to fall asleep.

Lumpy Space Princess finally returns as the play is about to end, but she decides to sit down and watch Viola deliver the closing lines. Though the crowd's clapping is polite at best, Jake uses his stretchy powers to create multiple other arms and fill the room with thunderous applause for his daughter.

After the play, Jake and the others praise Viola backstage as Lumpy Space Princess barges in. Lumpy Space Princess admits she should be mad, but was really impressed... by Viola's raindrops, and to a lesser extent her performance. She rushes out, declaring the play will run for 20 years. Viola admits to Jake that she was just supposed to do the special effects for the play, but Jake is even more impressed that she worked on them. He and Viola repeatedly compliment each other as the episode ends. 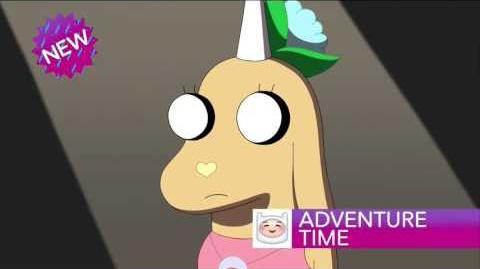 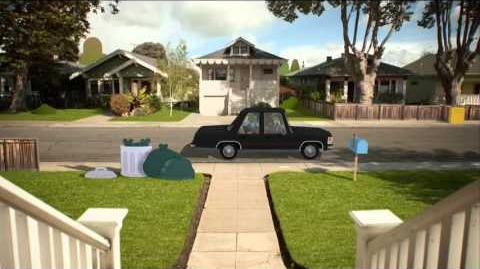 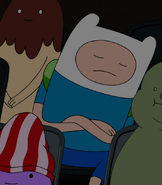 Summer Showers storyboard panel
Add a photo to this gallery

Retrieved from "https://adventuretime.fandom.com/wiki/Summer_Showers?oldid=821669"
Community content is available under CC-BY-SA unless otherwise noted.