Maurice LaMarche
Stranson Doughblow made his first appearance in "Wizards Only, Fools." He is interrogated by the Wizard City police outside of Ron James's Spell Palace. He is charged with impersonating a wizard and purchasing items from the Spell Palace. He pleads with the guards by saying he knows a few coin tricks, to try to verify that he is a wizard. He is then transformed into a hollowed-out wooden cane that the police use as weapons. Later in the episode "Betty," the staff of Stranson Doughblow is required to give the being of anti-magic Bella Noche full power and is placed on the ground around Bella along with a sword, an orb, and a goblet.

Before he is turned into a hollowed out wooden cane, Stranson was a light-blue humanoid with large ears. He had large, circular eyes and a thin nose. He wore a wizard disguise consisting of a dark-purple robe and a fake gray beard. 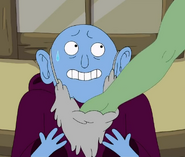 Stranson Doughblow as he really looks, without his fake beard