Keeping Goliad in check for all eternity

Stormo is a character who appeared in "Goliad." He is made by Princess Bubblegum out of Finn's DNA in addition to her own to create a candy sphinx that could rival Goliad. Stormo immediately engages Goliad in combat after being introduced. When Goliad offers to Stormo as her brother that they should rule together, he makes a bird noise befitting of his beaked mouth. The two then begin a mental battle, which Princess Bubblegum estimates to last for all eternity. Finn's DNA is what makes Stormo heroic.

Stormo briefly appears in "Princess Cookie," still locked in mental combat with Goliad. He is in the background of Princess Bubblegum while she is considering Finn and Jake's plan to neutralize the hostage situation.

Stormo is a white sphinx. Like Goliad, he is quadruped and has a feline-like body and a third eye in the middle of his forehead. However, unlike Goliad, Stormo has a noticeably birdlike head, complete with a beak. He has a slender white tail with a yellow tip. He has long blonde mane that is reminiscent of Finn's hair.

Princess Bubblegum notes that Stormo has the same psychic powers as Goliad, and the two are perfectly matched. This means he is capable of mind control, telekinesis, reanimation, and likely other feats. He also inherited Finn's heroic qualities, and will not hesitate to save people or sacrifice himself to stop villains. 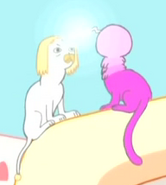 Stormo and Goliad's cameo appearance in "Princess Cookie"
Add a photo to this gallery
Retrieved from "https://adventuretime.fandom.com/wiki/Stormo?oldid=253583"
Community content is available under CC-BY-SA unless otherwise noted.