Maria Bamford
Stonesy appears in the episode "What Have You Done?" He is a hidden face in the wall of the Candy Kingdom's dungeon. He has a squeaky voice. Princess Bubblegum says "Ttubllaw" (Wallbutt backwards) to make him appear. Stonesy then asks for a password and the princess pinches him on the cheek. He then opens up the way to the dungeon floors.

He has rounded cheeks and two bricks for eyebrows. His chin also appears to be a brick. His lips are a lighter shade of gray than the rest of his body, which looks tan. 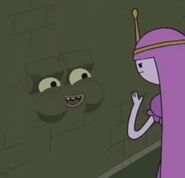