Kent Osborne
Somvilay Xayaphone
"Still" is the seventh episode in the third season of Adventure Time. It's the fifty-ninth episode overall.

Ice King freezes Finn and Jake with a potion so he can force them to befriend him.

The episode begins with Finn and Jake waking up to discover they cannot move at all. Ice King shows up in their room and reveals that he sprayed them with a freezing potion while they they were asleep. Ice King carries Finn and Jake from their beds to the living room, where he explains his reason for freezing them is so he can bond with them better as friends. The only way for them to be unfrozen is with a certain Unfreezing Potion A, which is in a bottle that looks exactly the same as Freezing Potion A. Gunter attempts to break the bottles, so Ice King puts them both on a shelf out of reach, locks them and hides the key in his underwear. After Ice King leaves the room to make lemonade, Finn realizes that because his body is in an impaired state, his mental sense has been enhanced, so he tries to mentally summon an Astral Beast to rescue them. Finn thus appears asleep throughout most of the episode.

Ice King's first bonding activity is to dress himself like Finn to better understand him, but Finn does not notice at all. Then Ice King decides to dress like Jake, but Jake stops him by yelling to avoid seeing Ice King naked (or only in spider web pixie pants). Ice King's next bonding activity is to give a very boring slideshow of photos he took of his penguins. While he is explaining the pictures, the key to the potions falls from his underwear. Jake tries to get Gunter to bring him the key, but the penguin does not cooperate. Ice King finds the key on the floor and puts it back in its hiding spot. Then, seeing Gunter bothering Jake, Ice King thinks they are bonding without him and locks Gunter in a cage. That night in the bedroom, Ice King tries another bonding activity with Jake, a "late-night gab session." but quickly falls asleep with his eyes open. Meanwhile, Finn finally succeeds in summoning an Astral Beast but does not see what it looks like before he wakes up.

In the morning, Ice King offers to cook omelets for breakfast. Jake thinks it sounds good until Ice King says he plans to put his foot in the omelets claiming "it will bring them closer together." After he leaves, butterflies congregate in Finn and Jake's room, and they soon realize that they are the Astral Beast Finn was trying to summon. Finn is disappointed until Jake finds that they can control the butterflies with their thoughts. They use the butterflies to help them confront the Ice King, but he accidentally uses the freezing potion on himself. He calls for Gunter to bring him the unfreezing potion, but Gunter knocks it out of the bedroom window and does a little dance. 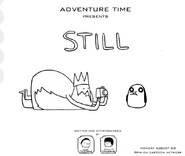 Finn inside the Astral Plane

Calling for the Astral Beast