Tom Kenny
Starchy (sometimes reffered to as Starchie or C3591-F in Graybles 1000+) is the Candy Kingdom's residential gravedigger. He first appears in "Slumber Party Panic," in which he is frightened by a Candy Zombie and suddenly explodes while delivering a larger corpse shovel to Princess Bubblegum. He was later revived by the decorpsinator serum.

As revealed in "Graybles 1000+," Starchy faked his own death to escape from the Candy Kingdom during the events of "Jake The Brick." The storyboard of the former implies that he was cloned, as his gravestone reads "In memorium of Starchy 1, eaten by a Grass Lard. He loved to walk," meaning the Starchy that appears in episodes taking place after "Jake The Brick" isn't the original one. However the new cloned Starchy seems to contain the memories of the original Starchy.

In addition to grave digging, Starchy also appears to work a variety of jobs in the Candy Kingdom, such as mailman, janitor and train conductor. He also explores his superstitious, conspiracy-seeking nature through activities such as his late-night radio call-in show "Graveyard Shift", which aired its fifth anniversary special during the events of "Blank-Eyed Girl," and his leading of the Veritas Brigade, a group that seeks to uncover the dark secrets and activities of Princess Bubblegum, whom he distrusts. He repeatedly attempts to uncover untoward activities by her (though correctly guessing she was replaced by a lizard replicant), faking his own death, and voting for the King of Ooo in the princess election.

Starchy resembles a chocolate malt ball and a potato. He has a long, thick brown mustache and wears a blue janitor's hat. Unlike most Adventure Time characters', Starchy's eyes appear to be perfect circles. Starchy is also one of a few characters to have eyebrows.

Starchy is a very superstitious individual as he has a strong belief in magic and the paranormal. His devotion to magic is seen in "Wizards Only, Fools," where he gets a cold and stubbornly refuses Princess Bubblegum's cold medicine, demanding magical treatment instead. When Princess Bubblegum openly denounces magic, calling it "scientific principles presented like mystical hoo-doo," Starchy becomes very upset and begins to cry. In "We Fixed a Truck," Starchy demonstrates his belief in paranormal activity as he is heard hosting a late-night show called Graveyard Shift that deals with "haints, phantasmagoria, and phenomena" in the Candy Kingdom. In "Blank-Eyed Girl," Finn calls into Starchy's radio show for advice on how to deal with the Blank-Eyed Girls, and Starchy offers a number of solutions corresponding to various paranormal creatures.

In "Billy's Bucket List," Starchy seems to be a fan of rap music as he attends a rap battle in the Candy Kingdom. While there, he vocally critiques the rhyming skills of Finn and Rap Bear.

In "Two Swords," he appears at the end of the episode driving a hover motorbike, which is eventually stolen by Fern.

Frozen Starchy from "What Have You Done?"

Starchy in the title card for "Escape from the Citadel"

In the audience at the "Wizard Battle" 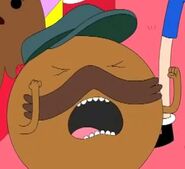 As a "mail carrier"

Being watched by the Earl of Lemongrab

Starchy bartending in "The Suitor"

“No! Starchy only takes magic!”