"Death in Bloom"
Stanley is a character in Adventure Time who appears in the beginning of "The Jiggler" with his family. Stanley is a watermelon, and the rest of his family includes a pear, a banana, a pineapple, a sausage link, another watermelon, and four marshmallows. They live in a small house in the woods, which is revealed to be part of Veggie Village in "Death in Bloom."

Finn and Jake, while scorched and partially on fire when returning Stanley and his family to their home, say that Stanley gets into trouble often, signaling that they were, apparently, in real danger. Stanley does not interact with Finn or Jake, nor does he speak during the entire series. 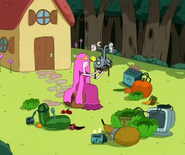 Stanley's house in Veggie Village and its surrounding area 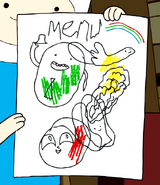 Stanley as he appears on the menu Finn draws for the Jiggler
Español
Community content is available under CC-BY-SA unless otherwise noted.
Advertisement