"Skyhooks II"
The Stag (also known as the Deer) is a character introduced in "No One Can Hear You."

The Stag rampages through the Candy Kingdom, licking its residents as it goes. Finn and Jake soon arrive to stop it, but are beaten. Jake sustains a serious head injury, causing him to go insane (until Finn bashes his head against a wall a few times). The Stag breaks both of Finn's legs twice, and then throws him into a pole, sending Finn into a coma. The Stag's saliva is orange, and it appears to have an adhesive property, which he uses to capture Candy People, drag them into the sewers, and then stick them to the walls in a drainage room because he "wanted their sugar." His two front hooves are actually gloves which conceal two human-like hands with opposable thumbs. He also has the ability to walk upright, which he uses while fighting Finn and Jake.

Finn and Jake eventually come to rescue the citizens in the sewer where they confront him. The Stag is knocked unconscious by two falling cinder blocks that were attached to Jake's feet, and then he is pushed into a whirlpool. Assuming that the Stag has similar properties to real-life deer, he is a male, due to his antlers.

It was later seen in "Sons of Mars" where Magic Man transformed it into a telescope to look at a comet coming towards him which turned out to be Grob Gob Glob Grod.

The Stag was much later returned to his original form after the de-elementization of Ooo in "Skyhooks II." 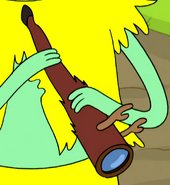 The stag from "Sons of Mars" as a telescope