Squirrel (The Duke)
Squirrel (Up a Tree)

"Gumbaldia"
Squirrels are reoccurring woodland critters that make multiple appearances across the series. There is a squirrel that despises Jake for not publishing his letter in Jake's article seen in "The Duke." In "Storytelling," Finn frightens a couple of squirrels when searching for romance to go in Jake's story. In "Up a Tree," Finn meets a squirrel with dreams of becoming a flying squirrel.

The squirrels in the series do not all share an identical appearance, but do possess the traits found in the common tree squirrel. These would be slender bodies, bushy tail, and large eyes. The fur of the squirrels are all some shade of brown, with the Squirrel (The Duke) being the most unique; his fur is a reddish-brown. 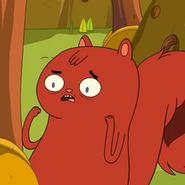 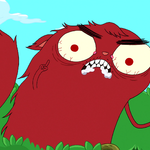