Land of Ooo
Squeez-E-Mart is a small grocery store located within the Land of Ooo. It first appears in "Ghost Princess" as the location of Clarence's death after consuming too much Softy Cheese. The store appears again in "One Last Job" when the Flying Lettuce Brothers trick Tonya into handing over the store's cash to them by mimicking the voice of the Squeez-E-Mart boss on the phone. Squeez-E-Mart appears in "Dark Purple" as a skateboarding venue for Finn, Jake, Marceline, and BMO as they await the store's monthly shipment of Super Porp.

The shop resembles a modern-day convenience store, only covered in plants and somewhat run-down. It has solar energy cells on the roof, a wind turbine beside it, and another turbine built into the side of the building. Much of the store's interior shows signs of wear as several sections of the wall and ceiling are crumbling apart. Overall, the store's appearance and condition suggest that it existed before the Mushroom War.

Most of the products on display are common sights in grocery stores, such as soft drinks and snacks. There are also canned and dried foods such as noodles, sauces, and coffee mix. Several items on the shelf show signs of age as they are covered in mold. In addition to food products, Squeez-E-Mart also displays merchandise such as tools, televisions, and a variety of headgear. The store also shows a sign stating its policy of "You broke it. You bought it."

Of the wide variety of products offered in Squeez-E-Mart, one of the most notable is Softy Cheese from a dispenser. The sauce resulted in the death of Clarence after he consumed so much that his stomach burst, ultimately killing him. This event traumatized Jake, forcing him off of the cheese sauce until he was forced to confront what happened after seeing Clarence once again in "Ghost Princess." Another notable product is Super Porp, a pre-war soft drink that is still in production hundreds of years after the conflict. The drinks are delivered to a vending machine outside the store on a monthly basis.

The various goods for sale on the store's shelves. 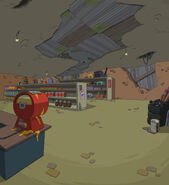 The interior of the building.

The Squeeze-E-Mart boss and Tanya in the store.

BMO and Marceline watch Jake skateboarding outside the store.

A Super Porp delivery drone's visual of the outside.

Jake waits for the next Super Porp shipment, one month after Susan Strong shut down the factory producing it.