Jesse Moynihan
Ako Castuera
"Sons of Mars" is the fifteenth episode in the fourth season of Adventure Time. It's the ninety-third episode overall.

The episode starts with Magic Man taunting the Stag and notices a star falling from the sky. He transforms the deer into a telescope to be able to see the star, revealed to be his older brothers and sister, Grob Gob Glob Grod. Grob Gob Glob Grod, intending to capture the Magic Man, activates a device that drains the Magic Man's magic juice in an attempt to slow him down. As Finn and Jake walk beside a train track, while carrying broken parts of a robot for an unknown reason, Magic Man slams into them, knocking them to the ground. As Grob Gob Glob Grod closes in, Magic Man turns Jake into a duplicate of himself, and disguises himself as Jake. Grob Gob Glob Grod confronts Jake (disguised as Magic Man) and takes him to Mars.

Finn is enraged at Magic Man for framing Jake and demands that he should help him save Jake. Magic Man refuses to help him, explaining that his powers will remain in a drained state until Jake is executed on Mars. Finn attacks him, causing Magic Man to change his mind and take Finn back to his house. Magic Man shows Finn around the trash of his house in order to find a way to reach Jake, though he tells Finn he will be unable to use it. Finn finds a picture of Magic Man with a woman and tosses it aside. Magic Man then takes Finn downstairs to find the Martian transporter. Despite Magic Man's claims of the transporter's inoperable status, Finn thinks of Jake and is then teleported to Mars, just outside of the Martian city. Finn attempts to get into the dome where Jake (mistaken for Magic Man) is being accused of Magic Man's crimes against Mars. The King of Mars (Abraham Lincoln) gives him two choices of death (one by total annihilation, and the other by being turned into space dust), but is interrupted by Finn who attacks Grob Gob Glob Grod. Finn's attack causes Grob Gob Glob Grod to drop his wand on top of Jake, killing him. Finn is shocked at what happened and criticizes Lincoln for not listening to Jake. Lincoln feels guilty, so he confronts Death and offers him a dirty penny for Jake's soul, but Death chuckles and rejects the penny. Lincoln is forced to sacrifice his immortality to save Jake. After Jake is resurrected, Finn asks if they should go get Magic Man. Grob Gob Glob Grod tells him not to do so, as he had lost a friend and cannot lose his brother. Finn and Jake teleport back to Earth and attack Magic Man. Finn then notices a Tiny Manticore in a bottle calling him a coward, so Finn breaks the bottle and sets the manticore free. The manticore flies off and scoffs Finn's help, but begins a wholehearted monologue once he is farther away:

"I am the true coward. Hiding from sincere expressions like a vampire in the nude who hides from the light. Thank you, brave hero. I was freed from bottle jail, but my new prison...is shame. MY NEW PRISON IS SHAME!!!"

His shouting causes Finn to ask, "What's he saying?" to which Jake replies, "He said his new prison is shame." 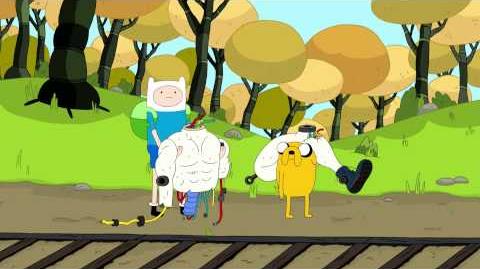 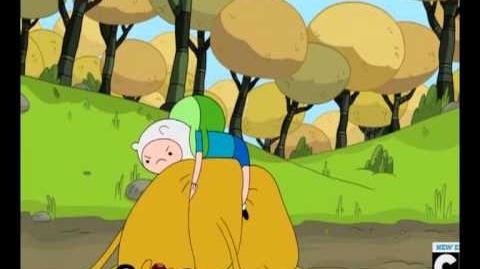 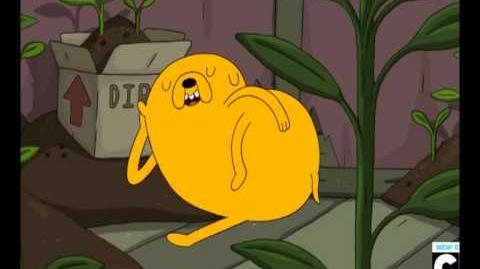 A corner of Magic Man's house

The room with the Pod

The Magic Man talking to a deer

The Magic Man turning a deer into a telescope

Finn looking at the Tiny Manticore

The king of Mars offering a tarnished penny

The king of Mars' statue is what is left of his body after giving up his immortality.

The King of Mars suddenly being alive inside the dome