Son of Rap Bear or "SORB" for short, is a character who first appears in the episode "Son of Rap Bear". He is the son and much less “protégée” of Rap Bear. He is first heard of from Toronto after he deceives Flame Princess into signing up for the “Rap Festade”, in which the ultimate sacrifice for losing against SORB would be for her to lose control over the Fire Kingdom. SORB has been depicted to host the power to decimate/displace objects or people through the power of his rhymes/lyrics, a clear example of this being Rap Bear whose legs had been severed off due to his sons rhymes.

SORB is the same height as the rest of the Party Bear population (if not shorter). Like his father, he resembles a brown bear. He has the words ”SORB” written across his stomach in a similar liking to how Party bears have symbols and icons across their stomachs. In both of the two appearances he’s made in "Son of Rap Bear", he was seen wearing a red coloured backwards cap which had the words "SORB" on the back.

SORB has been portrayed as an arrogant, persistent individual who hasn’t acquired the knack for being empathetic as it is heard he “rapped” his own fathers legs off. Along with this, he is fairly overconfident and rude in general, along with rather cruel considering his actions towards his father and his opponents. The reason for his personality differing from his father's so greatly is unknown.

FP and SORB at Rap Festade 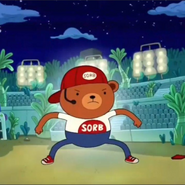