Jesse Moynihan
"Something Big" is the tenth episode in the sixth season of Adventure Time. It's the one hundred and sixty-sixth episode overall.

Maja invades the Candy Kingdom with an ancient power in order to capture good emotion to power her magic.

The night before the current events, Maja walks to the edge of a cliff and used a magic incantation to slow down time. She summons Darren the Ancient Sleeper, a giant tree person, whom wakes up from the beneath the surface. Darren explains to Maja that he had a dream he was in a war, but Maja immediately asks Darren to destroy the candy kingdom, as it has the highest level of caring which powers Maja. Confused, Darren asks Maja what caring is and what kind of world he is in. Maja replies that she has used Princess Bubblegum's rock T-shirt (which was Princess Bubblegum's prized possession) to summon Darren. Darren, still confused, walks through the plan with Maja, except Darren explains he will devour the candy kingdom for all eternity, and that he will deliver destruction to all realities.

In the present, Darren attempts to break out of the force field with his staff, but fails. Gridface Princess reveals that the shield should hold until Princess Bubblegum can think of a "weak plan." Meanwhile in the background, Finn whispers in Jakes ear and both give a thumbs up. Jake then grabs Finn and stretches offscreen. Princess Bubblegum calls Colonel Candy Corn to ready the cannons. He does so but begins talking off topic about his love life explaining that there's no women out there for him. Peppermint Butler gives advice to him leading to Princess Bubblegum giving Peppermint Butler the phone. Princess Bubblegum then realizes that Finn and Jake are gone, she hops on her Swan and flies towards Darren. Darren then summons monsters from another realm to help him break free. Colonel Candy Corn fires the cannons to destroy the monsters. One of them punches the generator and the shield turns off. The cannons ran out of ammo, so Colonel Candy Corn decides to defend the kingdom by firing himself, and his soldiers. He lands on the ground, but Darren's mouth laser fries the soldiers. Colonel Candy Corn starts fighting the monsters with a sword. Darren starts to shoot at Princess Bubblegum but misses. Maja then uses wind and pushes Princess Bubblegum and her swan to the ground. Darren picks the two up and prepares to destroy them but Maja commands Darren not to as Maja needs her feelings, yet again. Darren is confused as he doesn't know what feelings are, and that he only knows life and death. A pink laser beam shoots Darren's hand and it's revealed to be Finn and Jake riding on the Ancient Psychic Tandem War Elephant. Darren asks him mid-flight what the Elephant thinks about the world, but Finn commands him to keep shooting at him. He does so only to get his laser deflected hitting the Ice Kingdom, and Ice King warns the others to leave him out of the fight. They shoot all the monsters triggering Maja into a rage. She prepares a magic lightning bolt but is hit by the laser from the other head of the Ancient Psychic Tandem War Elephant which blasts her into the forest, where she knocks her head against a tree and lands on the ground, unconscious. The Ancient Psychic Tandem War Elephant reveals to Finn that Darren's weakness is his brain seed. Jake launches Finn into the air, Finn enters his head and uses his sword to stab the seed. Darren explodes and the Candy Kingdom celebrates. 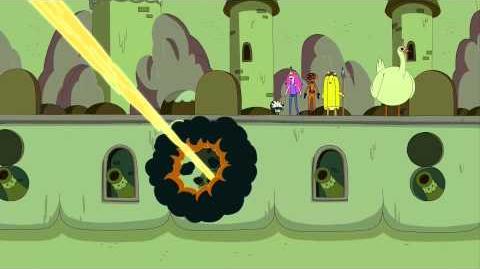 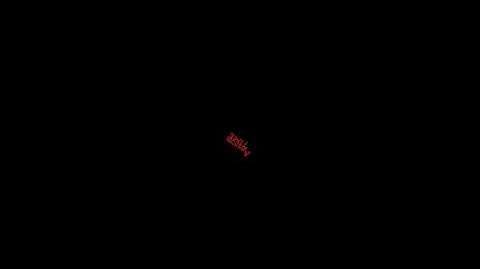 Root Beer Guy— or at least what's left of him

The Legion of Cadmus