SnowBrawl Fight is a game created by Cartoon Network.

The Battle of Supremacy has begun! Cartoon Network's greatest heroes are going head-to-head in the ultimate snowball showdown Snowbrawl Fight!

You can only use the special shots when your power gauge is full. Your Power Gauge will fill up slowly every time you hit somebody.

So far, there is only one cheat for this game. Including: 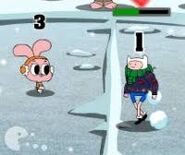