"Wizard City" (Distant Lands)
The Snail is a character that is hidden in every episode of Adventure Time (excluding the pilot, "Food Chain", "The Wand", "BMO", "Obsidian", and the Frog Seasons shorts.), usually seen waving at the screen. His cameos are a running gag. In the episode "Mortal Folly," The Lich possesses the Snail and uses it to escape containment in the amber prison. Later in "Mortal Recoil," the Lich possesses the Snail again after releasing Princess Bubblegum from his control.

While the Snail was just a running gag at first, he eventually became an integral part of the story when he releases the Lich in the episode "Mortal Folly". The Snail comes out of Finn's pack to wave to the viewers, but then falls under The Lich's mind-control spell and breaks the amber prison by bashing it with his head. He appears at the end of "Mortal Recoil," and once again at the beginning of "The Lich," still being controlled by the Lich. In the Adventure Time comic book series, he goes into the Lich's bag while still under his control and comes out normal again unharmed.

At the end of "In Your Footsteps". the Snail speaks for the first time and gains The Enchiridion. The Snail still continues to appear in each episode, and (when examined closely) appears to still have green eyes and an evil expression on its face.

In the episode "The Lich", the Lich ends up changing bodies moving to that of the deceased Billy. After this, the snail no longer shows any further sign of possession as revealed in "Up a Tree".

In season three, the snail is still possessed by the Lich in every cameo.

In season 4, the possessed snail is still making cameos, but it played a major part in the episode "In Your Footsteps." As inferred from the dream in "The Lich," the Snail appears to have been abandoned by the Lich when he took over Billy.

With the Lich abandoning the Snail at the end of the previous season, it has been restored to its normal pre-"Mortal Folly" role.

Appearance in other media

References in other media 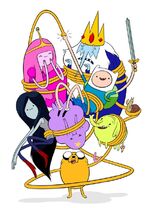 The snail with the main characters

The snail on a leaf 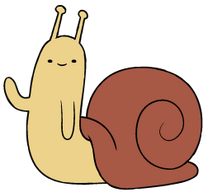 The snail in "In Your Footsteps"

The Lumpy Space Prom scene aired with no snail.
Designs