Finn and Princess Bubblegum are in the Graveyard doing a science experiment aimed to bring dead Candy People back to life, while Jake and Lady Rainicorn are playing in the forest. She tests her decorpsinator serum on the dead Mr. Cream Puff. However, he's resurrected into a Candy Zombie that craves sugar. Mr. Cream Puff then spills the serum all over the graves of the dead Candy People, and they rise as zombies too. Princess Bubblegum tells Finn that the Candy Zombies will go to the Candy Kingdom and consume the Candy People.

At the kingdom, Princess Bubblegum summons all of the Candy People to the main candy foyer, where she announces that they are all going to have a slumber party. She explains to Finn that if the Candy People find out about the zombies, they'll explode in fright (although they don't explode in later episodes when they become afraid). At the same time, Starchie searches for Princess Bubblegum in the Graveyard to give her a bigger corpse shovel, but he explodes upon seeing a Candy Zombie. Back at the Candy Kingdom, Bubblegum makes Finn royal promise not to tell anyone about the candy zombies, then gives him orders to keep the people distracted while she tries to finish the serum in her lab. Jake hears part of the discussion and begins asking what Princess Bubblegum and Finn were up to. In an attempt to keep the promise, Finn avoids answering Jake and tries playing Truth Or Dare, where Chocoberry dares Mr. Cupcake to take off his wrapper. Mr. Cupcake then asks Jake whether he prefers chocolate or fudge. Jake says he can't eat either because he is a dog, and if he eats either, he would probably die. But he says if he had to choose, he would choose neither fudge nor chocolate. Finally, Jake dares Finn to tell the truth about what's going on.

Finn tries to dodge Jake's question by starting a game of Dodge Socks, but when he throws his sock, Jake smells Mr. Cream Puff's scent on it, because Finn kicked the zombie Mr. Cream Puff when he attacked Princess Bubblegum earlier. To make sure Jake doesn't find out about the zombies, he gets Jake to play Seven Minutes in Heaven with Lady Rainicorn. Meanwhile, the zombies have arrived, and Finn tries to keep the Candy People ignorant by drowning out the zombies' noises with loud music and barricading all the exits and windows. Finn gets the Candy People to help him keep the zombies out of the castle by making up a game called Blockado, "the game of barricades." Knowing the blockades will not last long, Finn gets another idea when he takes a look at Manfried the talking piñata. He tells the Candy People that they're gonna smash piñatas (not Manfried) and blindfolds them so they do not see that the piñatas are really zombies breaking into the castle. Soon, they beat up all the zombies and start eating the candy that was stashed in them.

Jake and Lady Rainicorn come out of the closet and see all the dead Candy Zombies. When Finn tells him what happened, time suddenly stops. The only people who aren't frozen are Finn and Princess Bubblegum, who hasn't finished her equation yet. Suddenly, two Guardians of the Royal Promise arrive and grab Finn and Bubblegum. For breaking his royal promise, the guardians plan to punish Finn with a trial by fire. However, since Bubblegum cares for Finn, they decide to make him solve math questions instead. Finn is terrible at math, and at first, he is given a complicated math problem, but luckily one of the Guardians changes it to 2+2. Finn answers correctly and the Guardians reset time. Bubblegum realizes that 4 is the last figure she needs to perfect her decorpsinator serum, as she was too smart to see such a simple answer. Finn and Bubblegum bring the zombies back to life, including Starchie, and the Candy People reunite with their former dead relatives. Jake tells Finn that he should have just told him that he had made a royal promise to not tell about the zombies since Jake knows "what's up." Finn promises Bubblegum to keep his promises from now on, and Starchie (despite not being a zombie anymore), craves for flesh and bites Finn's leg. Finn squeezes him, and Starchie farts. 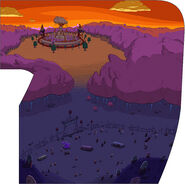 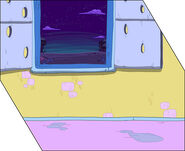 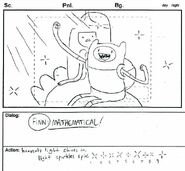 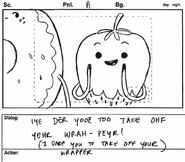