Maria Bamford
Slime Princess (also called SP) makes her first appearance in "Prisoners of Love" where she is kidnapped by Ice King. She showed a considerable amount of affection to Finn, despite him being clearly younger then her, even saying she wished to marry him, or at least until Jake told her that Finn "wets his pants constantly, all the time." She reappears in "Loyalty to the King," where she is the first princess to meet and befriend the "Nice King" in the park after misinterpreting his real name. And she again appears in "Video Makers" where Finn decides to use her in a scene for his movie where she does stunts around a river filled with alligators. Though she accidentally fell in the river, she ended up kissing the alligators instead of getting killed, ruining the scene for Finn. She also appears at the premiere of the film at Finn and Jake Movie Club. She is the ruler of the underground Slime Kingdom as shown in "Love Games." In "Princess Day," she and Breakfast Princess argue about their kingdom trade of one sugar for four eggs, then Breakfast Princess tells her she has an egg in her already, despite her saying that she is an artisan and that she can't just pop one out on command. This episode also reveals she is considered a registered princess. As revealed in "Elemental," she is the current Slime Elemental.

Slime Princess looks just as she sounds, like a glob of slime. The majority of her body is dull lime-green color, but she also has a yellow center. She has two arms, that when not being used may disappear back into her body. She wears a tiara similar to that of Princess Bubblegum, only the gem in the center is green, while Princess Bubblegum's is turquoise. when she has an egg in her it appears under her face in the her yellow center.

After Patience's mega-spell, Slime Princess grew in size, but still retains almost all of her physical features, though she lost the ability to speak English.

Since "Elemental," Slime Princess has learned to spew slime out from her hands.

She was seen to be using the powers in "Jelly Beans Have Power." 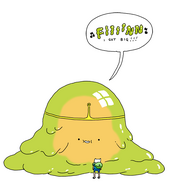 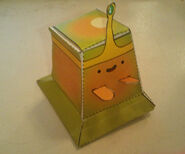 The paper cut-out version of the Slime Princess 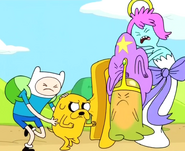 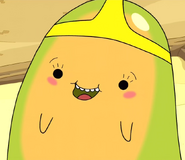