"Gumbaldia"
Slicer's Horse is a horse that typically appears whenever Sir Slicer is around. They are seen carrying Sir Slicer throughout the episode of "Blood Under the Skin." At the end of the episode, it was revealed that without the horse, slicer could not stand up, because his armor is too heavy. They again appear in "Gumbaldia," among other Candy Kingdom Haters, with Sir Slicer on their back.

They appear to be a pink horse with a white mean and tail. They also appear to have blue eyes. 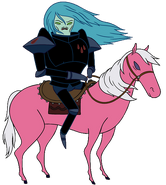 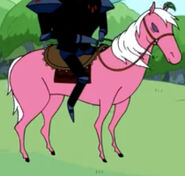