Sam Alden[2]
Polly Guo[3]
"Skyhooks" is the first part of the Adventure Time miniseries Elements and the sixteenth episode in the eighth season. It is the two hundred and fifty-fourth episode overall.

When they return to Ooo, Finn and Jake discover that there have been radical changes in their absence.[1]

The episode begins with Finn and Jake wading through the water towards Ooo, having just recently left the ship from "Islands." Everything appears pink. Finn and Jake discuss being exhausted from their last adventure and wish to rest for a while. Finn then realizes that something feels off based on his interaction with a candy fish. Jake thinks nothing of it and they continue on towards the Tree Fort. On their way, BMO emerges from Finn's backpack and he/she and Jake tease Finn for being so worried. Suddenly, Jake stops and is now concerned due to the Tree Fort being turned to candy.

Finn, Jake and BMO enter the candy Tree Fort. There is an unsettling feeling inside as Finn calls for Fern and finds a puddle of liquid dripping down from the ceiling. They make it upstairs to discover a spilled bottle of "Big Baby Root Beer," which Finn inspects. Then a candy version of Fern walks in, calling himself Fun the Human. Nectr and Gummyworm Shelby follow. Everyone seems uncharacteristically happy. Jake and BMO enjoy these new versions of their friends and seem content with the change. Finn is still uneasy about the situation and the candy versions of everyone reference a tower. Suddenly, a bell is rung and everyone runs outside to see the candy version of Lemongrab, Lemonpink, who spews pink lemonade into glasses in glee. Finn once again displays negativity and the tower is referenced once more. Finn grabs Jake and BMO and heads towards the Candy Kingdom to find Princess Bubblegum. Jake attempts to calm Finn's stress and then they come upon Sweet P, whom is still "meat."

Sweet P is crying and explains that everyone has turned to candy and Princess Bubblegum is at the top of a giant candy tower. Candy versions of Tree Trunks and Mr. Pig emerge from the bushes and attempt to coat Sweet P in caramel (which is unsettling to Jake), but he runs off with Tree Trunks and Mr. Pig following after him. Finn, Jake and BMO climb up the tower in search of Princess Bubblegum where they come across a monster s'more, which turns out to be Marshmeline the Campfire Queen, the candy version of Marceline. She leads them up the tower to Princess Bubblegum, who is shown to be the tower itself. She has become a pure candy elemental and explains that she "fixed" everyone by turning them to candy. Finn expresses his distaste in Bubblegum's actions, which causes her to begin turning Finn, Jake and BMO into candy. Finn and Jake attempt to escape, but are grabbed by Marshmeline causing Finn to accidentally punch her in the face, allowing them to escape her grasp. A rope of hangars (referred to as "skyhooks" by Ice King as he dispels them from above) fall from the sky down to Finn and Jake who grab on before becoming completely turned into candy. As they are pulled into the sky Finn exclaims, "Wait, we forgot BMOooo!" BMO is happy to be turned into candy. As Marshmeline pulls her face back into shape, Bubblegum states, "Oh well. They'll be back... They have no where else to go." Sweet P looks up at the tower in dismay.

Finn and Jake are quickly pulled up through the sky by Ice King's skyhooks. They land in the Cloud Kingdom and realize that their candy curse has dissipated. Finn thanks Ice King and is then ushered by Jake to look out at Ooo, which has become overtaken with elemental power. Ice King exclaims, "Skyhooks!"

Skyhooks storyboard panel
Add a photo to this gallery 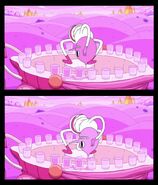 Coloring error
Add a photo to this gallery

Retrieved from "https://adventuretime.fandom.com/wiki/Skyhooks?oldid=812884"
Community content is available under CC-BY-SA unless otherwise noted.