Skeletons are a type of undead being in the Land of Ooo.

Most of them look like the classical human skeleton (completely composed of white bones). Some of them, such as the Skeletal Guards, wear clothes. Some others, such as Skeleton Baby, are gold-boned.

Skeleton Baby from City of Thieves 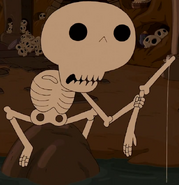 Skeleton of the Milk Ghost
Español
Community content is available under CC-BY-SA unless otherwise noted.
Advertisement