Cole Sanchez
Rebecca Sugar
Adam Muto (uncredited)
"Simon & Marcy" is the fourteenth episode in the fifth season of Adventure Time. It is the one hundred and eighteenth episode overall.

Marceline tells Finn and Jake about her and Ice King's past, 996 years ago.

The episode opens with Marceline, Finn, Jake, and the Ice King playing basketball at Marceline's house. Finn and Jake question Marceline on why she invited the Ice King, she then explains to them about her long history with the Ice King. The two request her to tell them about their past, as the Ice King comes back from getting water, agreeing.

She begins telling a story about the two of them (exactly) 996 years ago. It starts with 47-year-old Simon and 7-year-old 'Marcy' (Marceline) wandering through the empty ruins of human civilization, destroyed in the Great Mushroom War, searching for food. At the edge of the forest, they find a mailbox but there is only a dead rat inside. Simon tries to keep Marcy's spirits up by joking around, remarking that the rat will be a cute new traveling partner. He discovers a VHS tape nearby on the ground, and suggests they "watch" it - without a VHS player or electricity, he literally stares at the tape, then jokes that it was a boring movie and says the book is better.

They then hear a rustle from the woods, Simon then puts his crown on to protect him and Marcy, even though Marcy is clearly afraid of what the crown does to him. Simon reassures her and says he has to to keep her safe. Once Simon puts the crown on his head, its magic makes Simon forget himself. Marcy begs Simon to take off the crown. It turns out that the rustle is caused by a deer in the bush, but Simon has no control of himself as he blasts the deer with ice anyway. He mistakenly calls Marcy "Gunter" and tells her to play in the snow as he generates snowflakes to cover her. When Simon is using his freezing power on the deer Marcy throws a snowball to knock Simon's crown off. It takes a little while for the effects from the crown to wear off, and this worries Marcy. She then makes Simon promise never to put it on again. Marcy does not know what the animal is, and Simon explains that it is a deer. Marcy wonders that if the deer was alive in the woods, maybe other things have survived the war out there as well. Her comment underscores just how empty the wasteland is, with the pair not even knowing if other beings are alive despite months of wandering in the ruins. Simon pauses and ponders the question, but honestly does not know.

At the end of the day, Simon sets up camp for the two of them. The deer he froze in ice has solved their food problem for the moment, and Simon cooks it over their campfire. He tries to make her laugh by acting out an episode of Cheers for her through a broken television. Marcy then taps an old soda can and says, "mute." Simon mouths words as if he was actually muted. Marceline has a good laugh, but then begins to cough, making Simon realize she has a low fever. He tells her to sleep to preserve her strength.

Simon decides that Marcy needs chicken soup, and remembers that he saw a "Soupery" shop in a town they recently passed. Not wanting Marcy to walk all that way, he finds an abandoned motorcycle, but loses control when he tries to ride it, and they bail out before it crashes into a wall and explodes. Still not wanting Marcy to walk all the way, Simon has Marcy ride on a wheeled chair that he pushes all the way into town. He scat sings along the way to cheer up Marcy. Since the door to the soup shop was locked, Simon breaks a window to get into the soup shop, though he tells Marcy that vandalism is wrong. The shelves of the soup shop are all empty (except for some soup-themed novelty gift cards). Just then, Marcy looks in the security mirror in the end of the aisle, and notices something, shambling along in the next aisle. Simon peers over the shelves and is shocked to see some sort of weird mutant slime-creature. Alerted to their presence, it advances towards them, but Simon knocks the creature out by smashing its face in with his crown, then they flee.

Later, Simon and Marcy quest deeper into the abandoned city, by walking through a large concrete storm-drain. Marcy seems worse, but Simon notices a food truck abandoned on a broken bridge that passes over the storm-drain up ahead. They climb up, only to see it is a clam truck called, "The Clambulance," a frustrated Simon asks Marcy to cover her ears as he "curses" and kicks the truck. Suddenly, slime creatures emerge from inside. Simon then pushes the truck off of the bridge with the slime creatures on it, but the truck's siren starts going off after it crashes into the ground. This attracts a horde of the slime creatures, who chase Simon and Marcy to a dead end in an alleyway. Simon is forced to put his crown on, and tries to stay normal by singing Gary Portnoy's "Where Everybody Knows Your Name" (the theme from "Cheers") repeatedly, and after knocking all of the creatures out, takes his crown off. However, this time, most effects of the crown do not go away (his beard is the only thing that shrinks back to its normal length). Chicken soup and a can opener then fall from a pink substance clinging to the side of a building. Upon closer inspection, it appears to have a face, which smiles at Simon. He then uses the soup to cure Marcy. Marcy tells Simon she loves him and hugs him. Simon then says "I love you... Gunter."

The episode then goes back to the present. Marceline finishes the story, by saying that she gets better, and she and Simon live happily ever after. He then tells her to keep telling "these chumps" stories while he scores more baskets, proving he has no recollection of the events himself. The episode ends with Marceline, Finn and Jake smiling at the Ice King being happy. 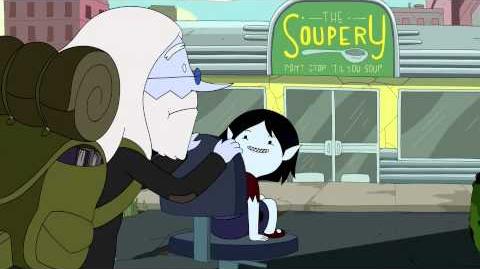 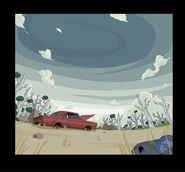 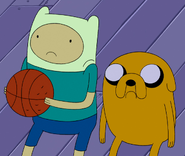 The snail in the episode

"I call upon the power of ice and snow!"

Simon and Marcy riding a motorcycle

"Your songs are sooo good."

Face seen on the pink substance

A Scientific Parasite in Simon's pocket

Retrieved from "https://adventuretime.fandom.com/wiki/Simon_%26_Marcy?oldid=820316"
Community content is available under CC-BY-SA unless otherwise noted.