Isabelle Fuhrman
Shoko was a black haired girl with green skin who died many years before the events of Adventure Time. She makes her first major appearance in "The Vault" where it is revealed that she is one of Finn's past lives. After her death, Shoko appears to Finn as an amorphous ghost in "The Creeps," "King Worm," and "The Vault."

In "Come Along With Me," she appears in the Nightmare Juice World when Finn and Fern open the Vault. Later, part of her is shown when Princess Bubblegum looks at Finn's robotic arm and has a flashback of the arm she made for Shoko.

When Finn arrives in the Dead Worlds upon his death during the third episode of Adventure Time: Distant Lands, "Together Again", he learns from Mr. Fox that he is able to shapeshift into any past version of himself, Shoko included.

According to Shoko herself, she was mutilated and abandoned by her parents at a young age, which resulted in her taking the path of a common criminal. She supposedly only has one arm because her parents sold her right arm for a computer before dropping her off at a dojo to give her fighting skills. Her parents never returned to the dojo; thus, Shoko was left without any parents or guardians. She later befriended a tiger, who was eventually confirmed to be one of Jake's past lives, and the two began to roam the Land of Ooo in search of work.

In her former life, she was a humanoid who was notable for having one arm, the other being removed and left as a stump. She had roughly knee-length black hair, lime green skin, and bright yellow eyes. In addition, she gains a mechanical arm from Princess Bubblegum like Farmworld Finn. Her outfit consists of a grey dress, flat shoes, and a teal scarf. She is also equipped with a dagger that is typically strapped to her chest.

Shortly before her death, Shoko was knocked into the radioactive river beneath the Candy Kingdom. This mutated her, turning her into a slug-like creature with two arms, the second grown back through mutation. Shoko retained this appearance - with minor differences - even as a ghost. Her spectral form had light grayish-blue ethereal skin with scale-like lumps and long green seaweed-like hair. Her scales are light blue, her irises are black, and her pupils shine red. Interestingly, her appearance differs from most of the other Ghosts in the series, who are all less colorful and more smoothly shaped. Even her ghost shape appears mutated. Her design is also similar to a Japanese-style ghost.

Due to her parents' abuse and her lack of a proper upbringing, Shoko had a warped view of morality and common sense. For example, she seemed genuinely surprised when Princess Bubblegum told her that parents are responsible for taking care of their children. She was also indifferent about criminal activity, such as stealing, as long as she would be paid with coin. This was seen when she casually took on the job of stealing Princess Bubblegum's amulet. In addition, dialogue between her and the Bath Boy Gang leader suggested that she had taken lesser, but still similar jobs in the past.

Although Shoko cared little about what was right or wrong, she was generally very kind towards those close to her, such as her tiger. Shoko also showed signs of guilt over befriending Princess Bubblegum for the purposes of stealing her amulet. She began to tear up when Princess Bubblegum presented her a mechanical arm for helping her in the Candy Kingdom. Despite this, Shoko's fear of the Bath Boy Gang forced her to carry out the theft of the Princess's magical amulet. However, years after her death, Shoko was able to redeem herself by making Finn return the amulet on her behalf.

Despite only having her left arm, Shoko was a skilled fighter. This was seen when she quickly defeats a Bath Boy Gang member while carrying buckets with little trouble. She accredited this to her time training at a dojo during her youth after her parents left her there and never came back.

Shoko is also a capable thief as she was hired by the Bath Boy Gang's leader to steal Princess Bubblegum's amulet. For the job, she cleverly decided to befriend the Princess rather than attempt to steal the item outright. Shoko also seems to easily work her new mechanical arm, even with the short amount of time she possessed it.

Shoko became a ghost shortly after falling into a toxic river which once flowed through the Candy Kingdom. Upon being immersed, a newly formed Gumball Guardian attempted to rescue her, but the waste proved too noxious for their bodies within the few seconds they attempted to fish her out. Shoko was mutated and later emerged as a long amorphous creature. She then crawled up a hill and died in front of a tree sapling. That very sapling grew into Finn's future tree house, where her corpse remained in the branches holding Princess Bubblegum's amulet.

As a ghost, she resembled the form she took during her death. Shoko first appeared in the Castle during the episode "The Creeps." Having the appearance of a large slug-like creature with long, green hair, Shoko came through the wall and gazed at Finn as her hair slowly filled the room. Thinking that she had killed all of his friends and that she was after him too, Finn broke through the wall to the next room to escape. Though he later found out that the party was just a prank by Jake and that Jake had no clue who she was. Due to this, he came to the conclusion that he only imagined it. He decided to forget the experience by putting it in "the vault."

Shoko, in her ghost form, made a minor reappearance in "King Worm" when Finn unleashed his subconscious fears to escape his dream. This reveals that although Finn put the memory of her in "the vault," he is still subconsciously afraid of her. In "Sky Witch," Princess Bubblegum passes what seems to be a painting or picture of Shoko as a ghost in Maja's house.

As a ghost, Shoko was able to phase through walls, which was preceded by a ripple effect on the space and a humming sound. Her green hair grew to fill the library that Finn was hiding in, as if trying to reach him. She seems to be able to take possession of items or produce hallucinations.

In "Come Along With Me," Princess Bubblegum briefly envisions Finn's robotic arm as the one she gave Shoko, which causes her to concede Finn's argument against war with Gumbaldia.

A rough line of the Ghost Lady

Shoko seen in the title card for "The Vault"

Haunting Finn in his dreams 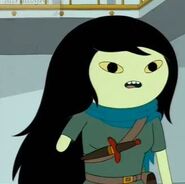 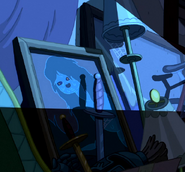 Mutated Shoko in a picture in Maja's attic

Shoko in her mutated form

Shoko emerging from the radioactive river

Trying on a mechanical arm

Shoko and her tiger unconscious

Finn in sleepwalk-dream with Shoko 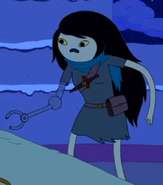 Shoko trying her robotic arm to steal the amulet

Shoko's robotic arm as shown in "Come Along With Me"