Sean Giambrone
Shermy is a character who exists in the future and is close friends with Beth. Shermy made his first and only appearance in the series finale "Come Along With Me." He and Beth appear to live in Marceline's house, where they have a collection of ancient artifacts.

Shermy is a small, light-gray cat.[1] Shermy has a long tail, a proportionally large mouth, small black eyes, gray freckles, and large ears. The end of his left foreleg and right hindleg are white instead of light-gray. Shermy wears a light-red t-shirt and a khaki satchel.

Shermy is adventurous and outgoing, and is curious about Ooo's extensive past. He apparently hates the library. It should be noted that Shermy's personality greatly resembles Finn's during the first few seasons. He also enjoys doing child-like things instead of thinking about his future. In fact, when asked about his future, he acts out what is presumably a heart attack.

Beth is Shermy's close friend. Not much is known about their friendship, as it is not shown in the series.

When Shermy has questions about the past, he looks for the King of Ooo, which turns out to be BMO. After some convincing, BMO agrees to explain the Gum War to him and Beth.

So far, nothing is known about Shermy's past, save that he came to live with Beth and he is fully aware of her lineage as the Pup Princess.

Somewhere in the relative past they began living in Marceline's now-abandoned house.  In "Graybles 1000+", he or Beth apparently mastered the ability to play Marceline's banjolele with enough proficiency to sound like her.

While Finn was driven by a primal need to help, Shermy is defined by his unbridled curiosity, roaming Ooo to collect its "treasure", mostly a hoard of garbage and relics of Finn's era. In "Come Along With Me," his failed attempt to capture a Prize Ball Guardian for its loot ends in him discovering Finn's mechanical arm.

Curious of its origins, but unwilling to visit the library, he accepts Beth's idea to seek the fabled "King of Ooo". This is revealed to be BMO, who now occupies a house on the top of Mount Cragdor, surrounded by relics of his past, and thought to be merely a legend. There Shermy and Beth start accidentally destroying parts of BMO's collection with Shermy wearing Simon Petrikov's glasses and Marceline's anti-smoking T-shirt, which prompts BMO to politely try to throw them out.

However, when Beth shows BMO the arm, he finally consents to tell Shermy about the Gum War, the battle against GOLB and the final fate of the people of Finn's era, albeit misnaming Finn as "Phil." He then politely throws them out.

Shermy then remembers seeing Fern's tree (previously shown in "Lemonhope Part 2" and "Graybles 1000+") in his travels around Ooo. He and Beth climb to its top and find the restored Finn Sword. He promptly takes the sword for himself, and poses with it like Finn during the opening of the show, symbolically accepting his mantle as the new Hero of Ooo.

Adventure Time with Shermy and Beth

Shermy and Beth, The Pup Princess

Shermy and Beth in the finale opening

Shermy and Beth looking up at the Tree House

Shermy fishing while sitting on Beth 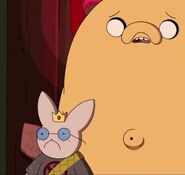 Shermy and Beth listening to BMO